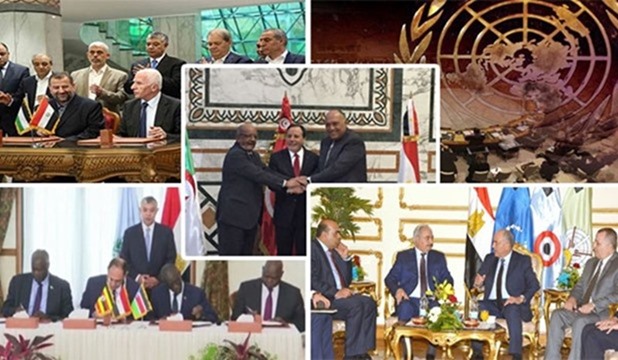 Egypt has made great efforts to establish security and stability in the region in order to stop armed conflicts and push for a political solution to the crises in the region. Egypt is moving at the regional level to defuse the crisis between the parties in a number of countries as Egypt has a central role in the region.

September 2017:  Egypt successes in ending the division between Fatah and Hamas to achieve unity

November 16, 2017: Egypt adopted the Cairo Declaration for the Unification of the Sudan People's Liberation Movement under the auspices of President Sisi, the Ugandan President and the Egyptian Intelligence.

Egypt, Saudi Arabia, UAE and Bahrain announced on June 5th, 2017 announced breaking off diplomatic relations with the state of Qatar over its support for terrorism and interference in the internal affairs of the four countries.

- Sponsorship of the Egyptian Committee  on libya  for the Libyan parties dialogue  in between the representatives of the legal entities in Libya, whether in the East or the West, and the dialogue with the Libya tribal elders to reach a framework for political settlement in Libya and implement the Skhirat agreement as a basis for political  and  settlement.

- Participation in the meetings of the Libya’s neighboring countries to discuss ways to provide political and security support to Libya.

- Egypt condemned the use of chemical weapons in the Security Council, called for an investigation on this event and to punish any party that proves to use this weapon against the Syrian people.

- The success of Egyptian mediation with a Russian guarantee to reach three agreements to cease fire and  stop violence against the Syrian people.

Second: Sponsorship of the Egyptian Intelligence  for an agreement with the moderate Syrian opposition, during their meeting in Cairo, on the work system on the third de-escalation zone north of Homs.

Third: Agreement with 3 factions of the armed Syrian opposition to ceasefire in the south of the Syrian capital Damascus on October 12, 2017.

Egypt's strategy in this important file has  been crystallized in the warning of President Abdel Fattah El Sisi to prejudice Egypt's share of the Nile water, as it  is considered a matter of life or death. Egypt is doing its best and is fully committed to  the negotiations  with Ethiopia to reach a common vision on Renaissance Dam through  the tripartite technical committee meetings on Renaissance Dam.

Egypt has played its role in the United Nations, especially after its election to the UNSC non-permanent membership representing the African continent during the years 2016-2017. Egyptian diplomacy has put forward many initiatives and assumed its historic responsibilities in defending Arab and African issues and issues of international peace and security.

Egypt has been a full member of the Human Rights Council for the period 2017-2021 after winning the October 2016 elections.

June 8, 2017: Egypt permanent delegate to the United Nations said that Arab countries are concerned with polarization affecting the UN Human Rights Council (UNHRC) actions. In a statement on behalf of the Arab group, Egypt called for adopting the principles of neutrality, transparency and accountability and avoiding double standards.

August 11, 2017: Egypt permanent delegate to the UN and deputy head of the United Nations Human Rights Council (UNHRC) has inaugurated the 19th session of the Human Rights Council Advisory Committee, which is tasked with conducting research and studies on human rights issues.

March 14, 2017: Egypt expressed deep concern over the deteriorating situation in Syria. Addressing an interactive dialogue of the UN Human Rights Council, Egypt’s Permanent Representatives to the UN condemned acts of violence practiced against civilians by the terrorist groups in Syria. Egypt called on the international community to intervene to stop hostilities in Syria, considering this move a basis for restoring stability in the country.

March 24, 2017: Egypt has abstained from voting for a UN Human Rights Council resolution on the state of human rights in Syria, saying it was politicized and not kept away from international polarization.

April 4, 2017: Egypt condemned in the strongest terms the attacks on the town of Khan Shikhoun in southern Idlib which reportedly killed scores of civilians. Egypt called for an emergency meeting of the UN Security Council.

April 7, 2017: Egypt's participation in the meeting of the Security Council against the backdrop of the US military escalation after the use of chemical weapons in Khan Sheikhan.

April 12, 2017: Egypt supports the draft resolution submitted by Britain, France and the United States on the investigation into the massacre of Khan Shikhoun in Syria in southern Idlib, calling on America and Russia to reach an accord about the crisis.

May 30, 2017: Egypt condemns the targeting of civilians, hospitals and schools in Syria, calling on all members of the Security Council to start a frank dialogue on the political process.

November 7, 2017: Egypt supports extending the mandate of the joint investigation mechanism for the Khan Shikhoun for another year.

April 20, 2017: Egypt calls the Palestinians and the Israelis to return to negotiations again, especially as the international community believes that the two-state solution according to the June 4, 1967 borders is the best solution to the conflict.

June 20, 2017: During a meeting on the situation in the Middle East, Egypt's Representative to the United Nations said that it is wrong to imagine that the region can achieve security, peace and prosperity for its people at a time when the Palestinian people groans.

December 8, 2017: Egypt delegate denounced the USA recognition of occupied Jerusalem as the capital of Israel during the Security Council's emergency session on Jerusalem and declared Egypt's rejection of any consequences.

June 21, 2017: Egypt Permanent Representative to the United Nations chaired a UN Security Council meeting on the international cooperation in combating terrorism. During the meeting, the Egyptian delegation stressed that the global judiciary cooperation is one of the most important pillars of counter-terrorism efforts.

July 20, 2017: During the session held to adopt the USA resolution to renew system of Daesh and al-Qaida Sanctions Committee, Egypt confirmed the need to adopt a comprehensive approach based on combating terrorism wherever it exists.

August 2, 2017: Egypt called on the international community and the UN to deter financiers of terrorist groups. Egypt's permanent envoy to the United Nations offered an Egyptian initiative to deter people from supplying terrorist groups with weapons. The gathering unanimously approved the initiative.

June 27, 2017: During the UN Security Council meeting on the “Challenges in Countering Terrorism in Libya” with Al-Qaida Sanctions Committee and the Libya Sanctions Committee, Egypt condemned the support given to the terrorist groups and organizations in Libya, specifically by Qatar and another countries in the region and the impact of terrorism on the situation in Libya.

May 8, 2017: During the meeting of the Security Council on the situation in Libya, Egypt's Permanent Representative to the United Nations confirmed the need for the international community to assist the Libyan government to prepare a full strategy to address the brutal crimes committed in Libya.

April 19, 2017: Egypt Permanent Representative to the United Nations called on the Security Council to discuss the situation in Libya in order to play a role in forcing the destructive regional powers to review their stances and refrain from tampering with the capabilities of the Libyan people and the region as a whole.

August 4, 2017: Egypt Permanent Representative to the United Nations sent a letter to the UN Security Council’s chief to be issued as a UN official document in response to Qatar's claims against Egypt. Egypt is obliged to uncover Qatar’s ideological and material support for terrorist groups that threaten not only the Middle East but also a number of world countries.

September 15, 2017: Egypt Representative to the United Nations refuted the allegations made by the Qatari delegation to the Human Rights Council that Qatar was being besieged by the four anti-terrorist countries "Saudi Arabia, the UAE, Bahrain and Egypt".

November 28, 2017: Egypt is ready to provide support for Libyans to combat human trafficking crimes committed by some criminal groups in the North African country. Egypt strongly condemns and rejects such practices that run counter to the stable human values, he added.

September 12, 2017: Egypt asserted the Arab states' rejection and condemnation of the ethnic cleansing and heinous violations having been committed for years by Myanmar’s extremists against Rohingya Muslims. The remarks were part of a speech given by Egypt’s permanent representative to the United Nations at the 36th session of the UN Human Rights Council (UNHRC) held in Geneva. The Arab states urged the UNHRC and all international organizations concerned to take the deterrent steps needed to stop the brutal massacres and genocide of Rohingya Muslims and to take all necessary measures to guarantee the delivery of relief teams and humanitarian aid to the area.

September 28, 2017: Egypt permanent delegate to the United Nations said that the UN Security Council should assume responsibility toward the dangerous crisis in Myanmar. Addressing a UNSC meeting on the plight of Rohingya Muslims in Myanmar, Egypt called for immediate end to the crimes committed against them.

June 29, 2017: Egypt delegate to the United Nations Security Council has accused Iran of interfering in Arab nations' affairs and fueling unrest in the region. Egypt reiterated the importance of commitment by all parties to the resolution 2231 to make sure that the Security Council actions are fulfilled as per the suggested purposes.

November 8-10, 2017: Egypt Representative to the UN participated in the first session of the Intergovernmental Group of Experts on Financing for Development, held by the United Nations Conference on Trade and Development (UNCTAD). He made a statement on behalf of the Arab Group, in which he stressed that the States are looking forward to the UNCTAD to play a central role in implementing the major global development documents including the United Nations Development Agenda 2030 and the Addis Ababa Plan of Action for Financing for Development.