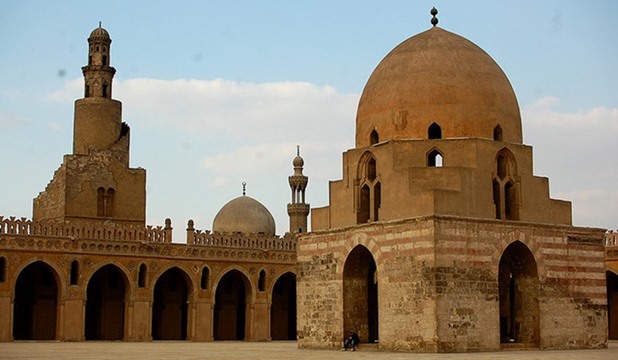 In 868 AD the Abbassid caliph al-Mu’taz sent Ahmad Ibn Tulun to govern Egypt. The new governor soon declared his independence and successfully defended his new domain against the Abbassid armies sent to unseat him. He built al-Qitai, a new capital centered around a vast central mosque, the courtyard of which could accommodate his entire army and their horses. His rule lasted for 37 years and was ended by the Abbassids. Mohammed Ibn Tugh was appointed governor over the province and was allowed to rule independently from khalifal controls. He was granted the title Ikhshid and hence the Ikhshidid dynasty ruled form Ad 935-969 when Egypt was invaded by Shi’a Fatimid armies from Tunisia. 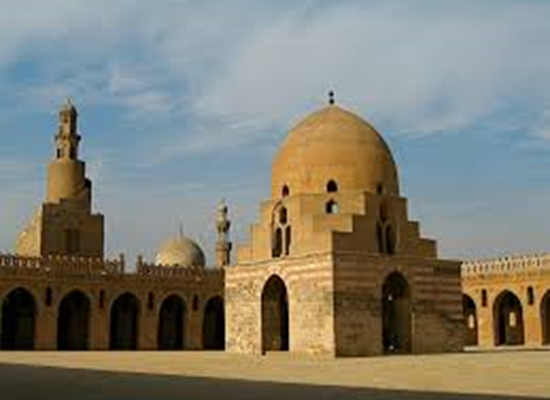 This is the third "large mosque" (gamee) built in Egypt. It is characterized by its spacious hall (saha), its unique spiral minaret and a large collection of gypsum decoration.
Built by Ahmed Ibn Tulun in 879 (265 H), the Ibn Tulun Mosque in the Sayyedah Zeinab district has an atmosphere of tranquillity unlike that of any other mosque in the city.

Ahmed Ibn Tulun was sent to govern Cairo by the Abbasid Caliph in Baghdad, which explains the Mesopotamian influence. 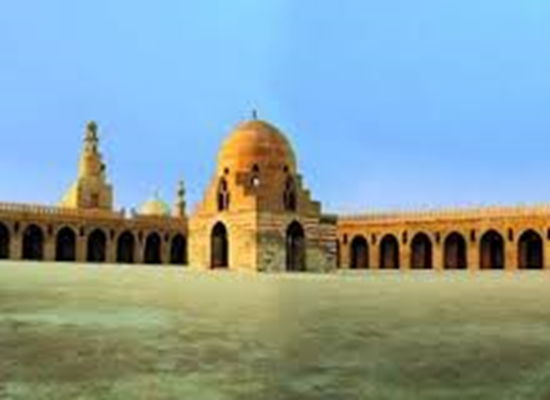 It is the oldest original mosque and the largest in Egypt.

It incorporates a number of unique features, such as the external spiral staircase of the unusual minaret (the only one of its type in Egypt) which is similar to the famous Samarra Mosque in Mesopotamia.

Its design is simple, consisting of an open sahn with an ablution fountain in the center, surrounded by four riwaqs, the largest being the Qiblah riwaq.

There are five naves on the Qiblah side (the side facing Mecca), and two on the remaining sides. The building style follows that of the Abbasid type, characterized by pilasters on which slightly pointed arches are applied, and which have a slight inward curve at the bottom.