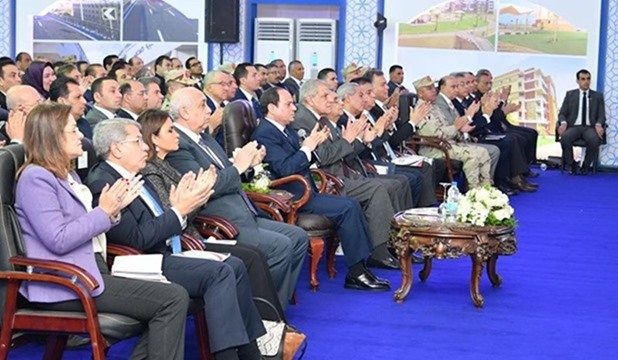 The opening ceremony is attended by acting Prime Minister and Housing Minister Moustafa Madbouly and several ministers and senior statesmen.

The ceremony started by reciting verses of the Quran.

1- South Fangary Bridge Corridor with the aim to ease congestion between east and west Cairo.

2- A drinking water plant in New Cairo has also been implemented at two billion pounds with a total capacity of 500,000 cubic meters.

4- Shubra-Banha road at a length of 40 kilometers with a total cost of EGP 3.6 billion.

President Sisi termed as "a tough challenge" finalizing the mega projects of housing, bridges, power and water stations over the past four years.

Commenting on the address of Housing Minister Mostafa Madbouli during the inauguration of a number of development projects in the 10th of Ramadan City, Sisi said it was a big challenge for the state to finish building one million housing units within a time frame of four years.

He said extra housing units ranging between 200,000 to 250,000 in the cities of New Ismailia, East Port Said have been established away from the proclaimed units at the first place.

The president asserted that ending such projects as scheduled helped in reducing the costs of construction.