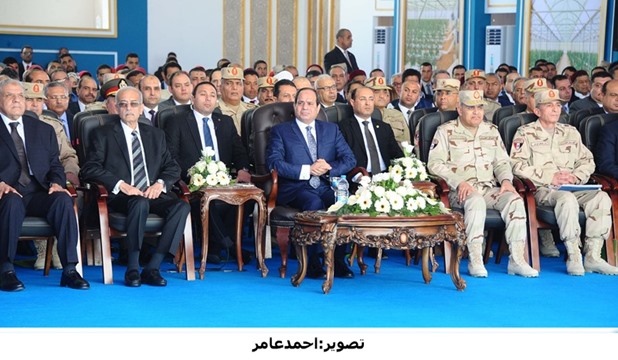 President Abdel Fattah El Sisi opened on Thursday 8/2/2018 the first phase of a project to establish greenhouses on an area of 100,000 feddans in the Mohamed Nagib base in Hamam area along Egypt's northern coast.

The military base includes 1,302 greenhouses established with the latest technologies. The greenhouses are to yield a production of around one million feddans of conventional farming.

The ceremony kicked off with the recitation of some verses of the Holy Quran.

With regard to making good use of agricultural resources and utilizing land and water resources, the minister said that several measures were taken to produce short-lived varieties of crops, such as wheat, maize and rice, as well as modernizing agricultural methods with the use of terrace farming of wheat and the establishment of greenhouses to rationalize water consumption.

About 455,000 feddans of wheat were cultivated in the governorates of Dakahlia, Sharqia, Minya and New Valley, he noted.

Also, the minister revealed a plan to increase the wheat-cultivated land to reach one million feddans.

He said that special refrigerators were provided to save seeds.

As for the rationalization of water consumption, he added that new varieties of crops were produced in 2016, which could help reduce the consumption of water by about 15 to 20 percent.

The 100,000 feddan-greenhouses-project is expected to contribute to creating more spaces for cultivation and rationalizing the consumption of water, securing new job openings and increasing agricultural exports, he said.

Some 400 people working at the Arab Organization for Industrialization were trained on how to operate the greenhouses, he pointed out.

During the inauguration of the 100,000-feddan project via the video conference, Sisi urged the Egyptian government and people to save every drop of water.

Sisi stressed the importance of this major national project, underlining that one feddan of cultivated tomatoes in greenhouses yields production six times more than that of one feddan in an open field.

For his part, Head of the National Service Projects Organization (NSPO) Mostafa Amin Ali asserted that the NSPO is establishing some 5,000 greenhouses on an area of 20,000 feddans.

This comes within the framework of President Sisi’s directives to set up 100,000 greenhouses, Ali said.

Addressing the audience attending the inauguration ceremony, he shed light on the importance of shifting to protected agricultural, which in turn could contribute to making good use of available spaces that suit various crops, including strategic ones and fodder crops, in addition to vegetables and fruit.

Board Chairman of the National Company for Land Reclamation and Agriculture Mohamed Abdel Hai said that NSPO benefited from similar experiences in developed countries with regard to building greenhouses, putting into consideration the nature of the climate in Egypt.

Also, Abdel Hai said that the company contracted with Spanish and Chinese companies to make good use of their manufacturing technology that is based on reducing production costs while retaining the manufacturing rights to the NSPO.

The project is meant to bridge the food gap, cut prices and rationalize the consumption of water, he noted.

As part of efforts to lower the gap between production and consumption, director of the military engineers department Hassan Abdel Shafei said the government began taking steps to increase the number of green houses and open new outlets for exporting Egyptian products.

Within this framework, the Armed Forces Engineering Authority was assigned to carry out the infrastructure of the greenhouses project in the Matrouh city of Hamam, he said.

The authority, in coordination with the National Center of Agricultural researches, chose to set up the project in Hamam city, 10 kilometer away from the southern coastal road.

The location was chosen for many reasons, namely good soil, appropriate climate and availability of water, he said. Water can be supplied to the project though Hammam Canal.

The project is also located near local consumption markets, Alexandria-Matrouh railway line, Alexandria harbor and Borg el Arab airport where products of the greenhouses can be exported abroad.

Greenhouses consume about 70 percent water less than these used in traditional agriculture areas.

They enable plants to grow in regulated climatic conditions, and provide a different weather than the outer environment.

Director of the Armed Forces Water Department Assem Abdullah Shokr attributed the current food gap in Egypt to overpopulation and the shortage of water resources.

This forced us to mull non-conventional methods to fill this gap, including developing irrigation techniques to rationalize the use of water, setting up more greenhouses in desert lands, setting up water pump stations and developing water networks, he added.

The Armed Forces Engineering Authority was assigned to carry out needed infrastructure to supply irrigation water to 4,252 greenhouses covering an area of 20,000 feddans in Hamam, Tenth of Ramadan and Abu Sultan cities, he said.

A documentary, prepared by the Morale Affairs Department of the Armed Forces, was screened during the ceremony featuring President Abdel Fattah El Sisi's directives for setting up a national company for protective cultivation to be in charge of cultivating 100,000 feddans by the greenhouse system.

The project is part of the one-million-feddan national agricultural project launched by Sisi in December of 2015.

The film showed that 20,000 feddans were cultivated by the greenhouse system in desert lands and the rest will be finalized by the end of June 30.

The documentary shed light on the four areas where the greenhouse project is being carried out; Mohamed Naguib Military Base, Abu Sultan city, Tenth of Ramadan and Al Amal Village in Qantara.

While the documentary was screened, Sisi intervened to say that the products of the greenhouses will not be exported until the needs of local markets are fully secured.

He denied that the National Service Projects Organization of the army is competing against the private sector in carrying out major agricultural projects, saying it takes three to four years to carry out such projects if they were left to the private sector.

He called on businessmen to rent these greenhouses to make the best use of them.

President Sisi said he is very keen to encourage young people to set up their own projects, saying the government is backing hard-working youths to innovate in different domains.

He said the Central Bank of Egypt allocated one billion pounds to finance youths' projects through interest-free loans.

Sisi called for providing a social insurance coverage for all workers operating in different development projects, saying around one million day laborers are working in projects carried out by the Housing Ministry.

He said the State is ready to set up, in coordination with banks, private sector companies, contractors and the Social Solidarity Ministry, a social insurance fund for day laborers.

President Sisi said the first and the second stages of Bashaer Al Khair housing project for limited-income people in the Mediterranean City of Alexandria sets a great model of fruitful cooperation between the civil society, businessmen and Tahya Misr Fund.

The project aims at setting up 15,000 housing units and will be finalized on June 30, the president said.

He called for organizing visits for students of schools and universities to these projects to know that there are projects being carried out on the ground to help limited-income people live a better life.

Also, such visits would encourage those students to donate even by a small sum of money to these projects, he said.

President Sisi said the State is keen to provide healthy agricultural products to citizens, saying there is no leniency in tampering with people's health.

The State is the only side that can secure safe agricultural products without any fear of the use of pesticides or polluted irrigation water, he added.

The current agricultural projects the State is carrying out aim at providing a safe and healthy food to citizens, he said.

Sisi noted that the products of these greenhouses will be provided to citizens through consumption outlets of the Armed Forces and the Supply Ministry to make sure they are sold at affordable prices.

The President toured the greenhouse project that covers an area of 8,540 feddans and listened to a presentation by one of the military engineers working in it.

At the end, the president took a photo op with all workers of the project.