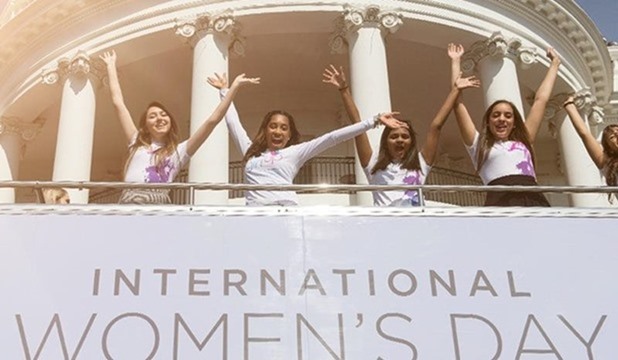 International Women's Day (IWD) is celebrated on March 8 every year. It commemorates the movement for women's rights .

While the first observance of a Women's Day was held on February 28, 1909 in New York, March 8 was suggested by the 1910 International Woman's Conference to become an "International Woman's Day." After women gained suffrage in Soviet Russia in 1917, March 8 became a national holiday there. The day was then predominantly celebrated by the socialist movement and communist countries until it was adopted in 1975 by the United Nations .

The earliest Women's Day observance, called "National Woman's Day,"  was held on February 28, 1909 in New York, organized by the Socialist Party of America at the suggestion of Theresa Malkiel. The day was commemorating a protest by women garment workers in New York on March 8, 1857.

In August 1910, an International Women's Conference was organized to precede the general meeting of the Socialist Second International in Copenhagen, Denmark.
Inspired in part by the American socialists, German Socialist Luise Zietz proposed the establishment of an annual International Woman's Day and was specified at that conference. Delegates (100 women from 17 countries) agreed with the idea as a strategy to promote equal rights including suffrage for women. The following year on March 19, 1911, IWD was marked for the first time, by over a million people in Austria, Denmark, Germany and Switzerland. Women demanded that they be given the right to vote and to hold public office. They also protested against employment sex discrimination. The Americans continued to celebrate National Women's Day on the last Sunday in February.

In 1913 Russian women observed their first International Women's Day on the last Saturday in February .

Although there were some women-led strikes, marches, and other protests in the years leading up to 1914, none of them happened on March 8. In 1914 International Women's Day was held on March 8, possibly because that day was a Sunday, and now it is always held on March 8 in all countries. The 1914 observance of the Day in Germany was dedicated to women's right to vote, which German women did not win until 1918.

On March 8, 1917, , in the capital of the Russian Empire, Petrograd, women textile workers began a demonstration, covering the whole city. This marked the beginning of the Russian Revolution. Women in Saint Petersburg went on strike that day for "Bread and Peace" – demanding the end of World War I .The Emperor of Russia, Nicholas II abdicated and the provisional Government granted women the right to vote.

This year, International Women’s Day comes on the heels of unprecedented global movement for women’s rights, equality and justice. This has taken the form of global marches and campaigns, including #MeToo and #TimesUp in the United States of America and their counterparts in other countries, on issues ranging from sexual harassment and femicide to equal pay and women’s political representation .

Echoing the priority theme of the upcoming 62nd session of the UN Commission on the Status of Women, International Women’s Day will also draw attention to the rights and activism of rural women, who make up over a quarter of the world population, and are being left behind in every measure of development .

Egyptian Woman and the January 25 and 30 June revolutions

The world praised the role of Arab women in general and of Egypt in particular, as they advanced to the ranks of the revolutionaries, where they played a key role in the revolution of 25 January and the revolution of June 30 Many of them sacrificed their lives and their children in order to realize the aspirations of the Egyptians for freedom, dignity and social justice .

The girls participated in the  protests and vigils that paved the way for this revolution and played a key role in the social media websites "Facebook and Twitter", as the catalyst of the revolution and its main engine, and succeeded in assembling the people's sects around the demands of the revolution of decent life and social justice .

Women enjoyed a distinguished position in society throughout the prosperity of the Islamic civilization. This position was not weakened except in times of weakness, collapse and periods of sovereignty of the foreign expatriate elements, with different perceptions and ideas contradicting  our cultural heritage which respects women .

The Egyptian women's movement and her struggle for political, social, legal and cultural rights,  and women  movement  that lasted for two centuries, mark women prestigious record.

The Egyptian Celebration of 2018 IWD

The rally is organized by a campaign "Citizen to support President Abdel Fattah El-Sisi", which is one of the official campaigns of President Sisi .

Speaking at the rally, Head of the campaign's women committee Dr. Manal el Absi said Egypt is in need of all national votes in light of its war on terrorism .

"The electoral vote is a bullet in the heart of enemies," she said .

It is undeniable that Egyptian women support President Sisi throughout his first term in office, she added .

A documentary, titled "three years of achievements" featuring President Sis's achievements over the past years, was also displayed .

Head of the National Council for Women (NCW) Maya Morsi on Sunday reviewed latest developments in the status of Egyptian women starting from the January 25th, 2011 revolution till the June 30th, 2013 revolution .

At a celebration organized by the Italian Embassy here to mark International Women's Day, Morsi cited several achievements for the Egyptian woman under the 2014 constitution, which gave her the chance to assume decision-making posts, such as the appointment of the first female governor and the first female national security adviser for the president .

Also, she shed light on legislation issued recently to combat discrimination against women through tightening the penalty for genital mutilation and sexual harassment, in addition to criminalizing women's deprivation of inheritance .

Moreover, Morsi pointed to the inclusion of an article in the Investment Act that provides for gender equality in investment opportunities, as well as supporting small and medium-sized enterprises .

The declaration of 2017 to be the Egyptian women’s year comes within the framework of the state’s efforts at the domestic, regional and international levels to strengthen the women’s role in society, she noted .

Under the chairmanship of Dr. Magdy Saber, the Egyptian Opera House celebrates International Women's Day and the Spring of Poets Festival, on the evening of March 7, 2018, in an event entitled "She-Poets" on the stage of the small theatre .

The guests will display a selection of their creative works, which tackle romantic  and  national themes, as well as an open dialogue with the public about the aesthetics of poetry, and the effectiveness of women's role in society and the most important challenges .

Wasl civil association  chaired by Fatehi El Muzayyen , in collaboration with breast cancer Bahia Hospital and food bank, celebrate International Women's Day, on Thursday 8/3/2018 at the Misr el Gadeeda  Library where 150  women of successful stories will be honored. The celebration will witness honoring of many media figures serving Egyptian women .

El Muzayyen asserted that the Egyptian women deserve all the support. They constitute 90% of the individual and community awareness. The she-breadwinners represent 33% of the Egyptian families .

Al- Muzayyen added that women make for the backbone of the developmental  and social  work in Egypt. Among the most prominent initiatives are "Masrawiya", "Khair Nun Al Neswa", and other initiatives from different governorates .

The event includes a number of successful experiences of people of  special needs and cancer fighters. It also includes various forms of assistance for woman and child .

Seminar on "The Effective Role of Women in Society"

In celebration of International Women's Day and Mother's Day, the Ahmed Shawki Museum in Giza will hold a seminar on "Effective Women's Role in Society" on March 25, 2018, in the presence of poet Ali Ahmed Omran at 6:30 pm at the museum .