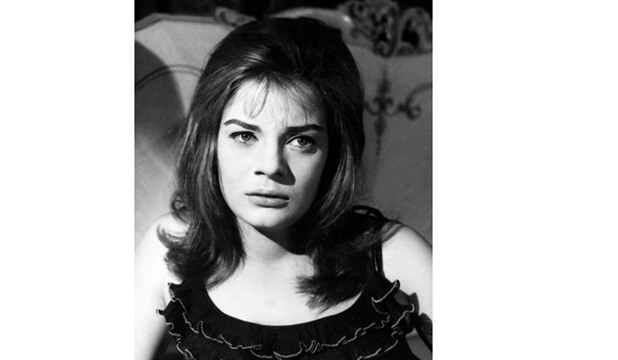 Paula Mohamed Lutfi Shafiq born in 1938, Cairo to an Egyptian father and a Polish Mother, was one of the most popular actresses during of the Egyptian cinema’s "Golden Age". (1960s-1970s)
When the 20-year-old was about to make her screen debut in 1958, Omar el-Sherif was the reigning king of the Arab cinema, and his wife, Faten Hamama, its queen. The star couple had just had a smash hit with the film La Anam with Hamama as "Nadia Lotfy," a willful teen who destroys her father’s marriage. Young Paula appropriated the name.

With her fresh new name, the young actress took her first role in a modest, black & white drama, Soultan. Her second picture was a smaller role in a landmark film of its time, Cairo Station, the film that brought filmmaker Youssef Chahine to international attention and acclaim when it was displayed in competition at the Berlin Film Festival.

But in Egypt, as Bab el hadid, the film’s story of a crippled newsboy’s doomed love for a lemonade stand girl, and its tragic outcome, was received coldly by Cairo critics and audience. The film wasn’t screened again in Egypt for almost 20 years.

Lutfi’s career progressed, and it soon became clear how her fans wanted to see her; primarily in light melodramas with a few sprightly musical interludes, a la 1962’s al Khataya, with Nadia as a hopeful bride, rejected by her fiancee’s father (until the final reel).

But there were a few exceptional films as well. In 1963, she played a Frankish woman warrior of the Crusade era, donning full armor to go into battle against her Christian-Arab lover, in Naser Salah el Din (occasionally airing on US TV as Saladin and the Great Crusades). In 1964’s Lil-Rigal Faqat, or For Men Only Lutfi and co-star Su’ad Husni played women geologists who, denied employment, respond by disguising themselves as men, and going to work, where they find they have to suppress their romantic natures to sustain the disguise.

In the mid-1960’s Lutfi starred in two films that were based on stories by Nobel-winning author Naguib Mahfouz, just a few years following the publication of his widely-banned novel of Moses, Jesus and Mohammed, Children of Gebelawi. Lutfi closed out the decade starring in 1969’s Abi foq al-Shagara, or My Father Atop the Tree, as a night club dancer who beds a much younger man, then discovers that she once knew his father equally well.

In the 1970s, Lutfi’s career quickly wound down as Egypt’s "Golden Age" for films came to a close, due to increasing competition from East and West, the growth of home video, and increasing costs for the film industry. Having made close to 50 films in the first 11 years of her career, she only made three in the decade that followed, and hasn’t worked in film since 1981.

Early in 2004, Lutfi interceded with the press on behalf of her long-time friend, Omar Sharif, who had rashly told the Arab press that he would allow his grandchildren, one of whom is Jewish, to choose their own religions as they mature. In 2006, Lutfi returned to the spotlight when a video by young Lebanese singer Nourhanne recreated a musical scene from one of her first films, Bain al Qasrayn.