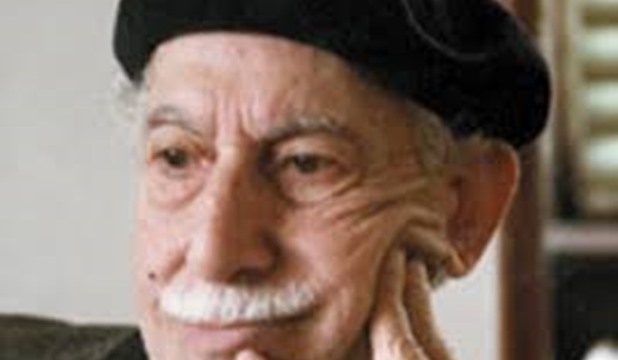 Dean of Dramatic Literature:
Tawfiq Al Hakim was influenced by the events of his age, which witnessed a comprehensive literary revival in all genres of Arabic literature.

He wrote in various types of prose and contributed to developing some of them, such as the essay, letter writing, short story, novel and drama. No man of letters, in Arabic literature, has ascended to the position Tawfiq Al Hakim which he acquired in this art, in quality and quantity.

Tawfiq Al Hakim was born in 1903 in Alexandria. His father was a rich man, a member of the Judiciary. As his father moved a lot from one place to the other, Al Hakim did not regularly finish his studies.

He settled in Cairo until he obtained his Bachelor in Law in 1925. He satisfied his desire in attending and reading plays, acting and trying to write for the theatre through reading European literature. He had all aspects that contributed to his maturity and creativity.


Tawfiq Al Hakim and Theatrical Art:
The theatrical art of Tawfiq Al Hakim went through many stages. It consists of three types:
1- Biographical Theatre:
The group of plays he wrote in his early life and in which he expressed his personal experience and attitudes towards issues in life were more than 400 plays among which were "Al Arees", (The Groom) and "Amam Shebak Al Tazaker", (Before the Ticket Office). These plays were more artistic because they were based on Al Hakim’s personal opinion in criticizing social life.
2- Intellectual Theatre:
This dramatic style produced plays to be read not acted. Thus, he refused to call them plays and published them in separate books.
3- Objective Theatre:
Its aim is to contribute to the Egyptian society, by fixing some values of the society, exposing realities of life and depicting "the real" Egyptian life.

Tawfiq Al Hakim was able to understand nature and depict its concepts in a distinguished style which combines symbolism, reality and imagination. His style was characterized by mastering narration, dialogue and selecting settings.

Some of his creations:
Plays:
* People of the cave
* The problem of the rule
* sis
* Solayman Al-Hakeem
* Oedipus the King
* Soft hands
* The deal
* The play of death
* The donkeys
* The sun of the day
* Food for each mouth
* You, going up the tree
* Journey to the future
* The thorns of peace
* Pygmalion
* Scheherazade
* The beguiled Sultan
* The ordeal
* Council of justice
* Theater of variety (21 short plays)
* Theater of the community (21 short plays)
Stories:
* The people
* Bird of the East
* Dancer of the temple
* Bank of anxiety
* Diary of an MP in rural areas
* The holy bond
* Return of soul
Novels:
* The Sultan of darkness
* The revolt of youth
* The wedding night
* Justice and art
* The era of the devil
Articles:
* Under the sun of the intellect
* Al-Hakim’s tree
* My donkey told me
* Of the ivory tower
* Under the green lamp
* The art of literature
* Between intellect and art
* Literature of life
* Challenges of the year 2000
Dialogues:
* Muhammad, the Prophet
* Al-Hakim’s donkey
* Talk with the planets
* Interior features
Political and Intellectual Books:
* Return to reason
* Egypt between two eras
* Equalism