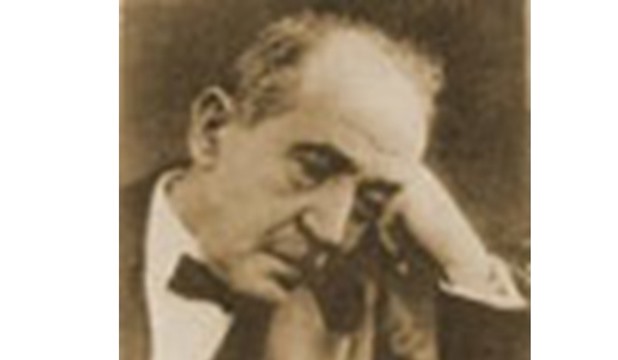 Ahmed Shawqi was born in Cairo and died in 1932. Shawki came at a time when Arabic poetry was weak in idea and style. So, his poetry was a step towards innovation through his prolific poetic writings and their variation, whether poems, poetic plays and epics, and prose books.
He was the first to write poetic plays in Arabic. He has a statue at the Garden of Immortals in Rome. In 1968 the UNESCO celebrated the anniversary of his birth.
He had full command of French, Turkish, Greek and English languages that helped him in reading Turkish and Greek literature, particularly the Greek theatre which inspired western writers.
He was deeply impressed by French literature, as he followed the steps of La Fontaine’s fables voiced by animals. He also followed the same line of Victor Hugo in politics, patriotism and national history, and Racine and Moliere in poetic plays.
In 1927, he was chosen the Prince of Poets by Egyptian and Arab poets at a ceremony held at the Opera House in Cairo.
In March 1996, his house was turned into a museum inaugurated by the First Lady Mrs. Suzanne Mubarak to honor a talented poet who enjoys, till now great respect and admiration among Arabic-speaking people.
Works:
Shawqi’s work can be categorized into three main periods during his career:
* the first coincides with the period during which he occupied a position at the court of the Khedive, consisting of eulogies to the Khedive: praising him or supporting his policy.

* The second comprised of the period of his exile in Spain. During this period, his feelings of nostalgia and sense of alienation directed his poetic talent to patriotic poems on Egypt as well as the Arab homeland.

* The third stage occurred after his return from exile: during that period he became preoccupied with the glorious history of Ancient Egypt and Islam. This was the period during which he wrote his religious poems, in praise of Prophet Mohammad. The maturation of his poetic style was also reflected in his plays, the most notable of which were published during this period.

Plays:
Shawqi introduced epic poetry in Arabic literature in the form of plays, such as:
Majnun Laila
The Death of Cleopatra
Antara
The Princess of Andalusia
Poetry:
Sawqiyyat (A sizeable anthology of his poetic works)
Nahj Al-Burda (A tribute to the Prophet Muhammad)