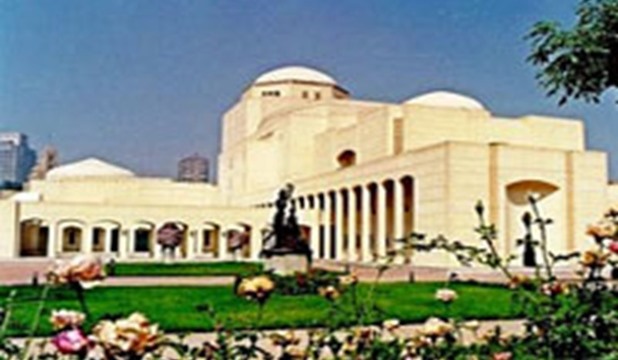 The Cairo Opera House was inaugurated on October 10th, 1988, following a void, which lasted 17 Years since the burning down of Cairo’s first and World famous Opera House in 1971.


It stands on the Gezira Island surrounded by other cultural centers: Museum of Egyptian Modern Arts, Nile Gallery, the Plastic Artists’ Association and El Hangar Theatre.

Special programs and training classes exist for young talented performers in all the artistic fields.

Main Hall:
All Egyptian artistic groups admire the main Opera hall. It is certainly the largest, most beautiful and the most sophisticated of all theatres in Egypt. One can gain access to it through different entrances. Designed to seat 1,300 spectators, the hall rises on four levels, with two upper circles, one grand circle and seats near the stage, as well as a presidential box on the third level, which the guests of honour can reach by elevator from the entrance hall.

The seats in the stalls rise in tiers, at regular intervals, to the projection and control room, equipped for the screening of 16 and 35-millimetre films and allowing the installation of TV-cameras. Circles and boxes are not only elegantly designed, but also ensure excellent vision of the stage, from which none of the 1,300 spectators is at a distance exceeding 25 meters.
The Cairo Opera House main hall provides the most comprehensive technical and stage facilities in Africa and the Middle East. The spacious, convertible orchestra pit, opens onto a huge stage 25 meters in width, 20 in depth and 10 in height, and can be divided into four small ones, so that the central stage communicates with the three others. It can thus accommodate grand opera, as smaller theatre, and is fully equipped with spotlight system, elevators for the various scenes as well as with all the devices for any required transformation. The stage can also be used for concerts and Modem Theatre, in its smaller size.

At the back of the stage, large storage rooms lead to two entrances for the loading and unloading of the stage settings. One can also reach the artists’ and performers dressing rooms, backstage, as well as further to the right, two important rooms for the machines and technical installation.
Small Hall:
The Small hall, with its wood-panelled walls and its removable seats, is capable of accommodating five hundred spectators. Situated on the ground floor, this theatre has its own entrance hall and foyer. The 13-meter wide and 7-meter deep stage is ideal for players for a limited number of actors, as well as for chamber-music orchestras, bands and recitals. It can also be used for conferences and other cultural events. The seats being removable, the entire place can be turned into a huge reception hall for important official events.

Next to the main foyer, and the smaller ones, having access to the boxes and the seats near the stage on the first floor, this level accommodates a second art gallery, a library, two halls for the museum, two work-shops, four huge rehearsal rooms with mirrors along the walls for ballet, as well as for orchestra and choir rehearsals. A room for study and a huge hall for general rehearsals are also situated on that floor.
Gomhouria Theater:
The Gomhouria Theater is an exquisite theater suited near Abdeen Royal Palace, and follows the administration of the Cairo Opera House, although not on its grounds. Many performances are presented on this theater, which is spacious and has a very nice façade. Its stage can hold medium sized performances well, and robustly.
Open-Air Theater:
The open-air theatre is a hemispherical, elongated stage and is planned as to ensure the excellence of acoustics. The central part of the open-air theatre is in the form of a square, at a lower level than the slowly rising tiers by which it is surrounded. Due to the fact that the seats are removable, this square can be used as a centre stage, while all the seats are placed on the surrounding tiers.
Cairo Opera Company:
For almost 100 years, and in spite of limited technical facilitates, Cairo Opera House continued to present foreign Operas produced by visiting companies. These productions were a standard comparable to any staged in the Opera houses of Rome, Vienna and Paris. It was not till after the 1952 Revolution that the Ministry of Culture seriously considered the encouragement of Egyptian artists.
Franz Lehar’s "the merry widow" and Verdi’s "LA traviata" were performed in Arabic.
A training Centre was founded where Gilan Rathie, was among the most eminent voice professors, coaching and teaching many who were later to become renowned opera singers. Graduates of this Centre formed the nucleus of the present Cairo Opera Company.
In 1968, the Company with the Cairo Opera Ballet Company, The Cairo Opera Choir and the Cairo Symnhony Orchestra staged its first production Gluck’s ORFEG, starring: Ratiba El Hefny, Violeffe Makar, Amira Kamel, Ghalia Rashed, Awatef El Sharkawy, Rejina Youssef and Nabila Erlan with conductor Ahmed Ebeid and director Viffono Feorefto. Local performers continued to present international operas including a number of male opera singers such as Hassan Kamy, Gaber El Beltagui. Sobhi Bedair, Redo El Wakil, Yousef Sabagh, Redo El Shenawy, Clude Rathle among others.

The Company first production was "The Fountain of Bakchisary" directed by Leonid Labrovsky (then Director of Bolshoi Theatre). From that beginning, the company went on to enrich its repertoire with the great ballet classics as GISELLE, THE NUT CRACKER, BEKHITA and SWAN LAKE among others.


Later, the Company introduced contemporary ballets by Egyptian music composers and choreographers. Among which, EL SOMOUD by Abdel Moneim Kamel (depicting the Egyptian people’s stand in the face of the 1967 defeat), the new version of EL SOMOUD.


The Cairo Opera Ballet Company has been on regular tours abroad. Performing first in the former USSR and later in Bulgaria, Yugoslavia, Germany, France and Tunis.


Now, the Cairo Opera Ballet Company. with artistic director Dr. Abdel Moneim Kamel Is officially affiliated with the new national Cultural Center, it has 25 Egyptian dancers then joined by 15 Russian dancers. That number expects to increase to 55 within the coming three years.


Recently, the Company has presented two full - lengths ballets. ROMEO & JULIET and DON QUIXOTE, both were acclaimed with great success.

Cairo Symphony Orchestra:
Although the Cairo Symphony Orchestra performed under this name for the first time in 1959, the artistic activity of this institution began some years earlier as Egyptian Broadcasting formed an orchestra to satisfy its need for music programs. The orchestra was developed when Franz Litchauer, an Austrian conductor, became its music director and after months of hard work started to perform regular concerts at the old Opera House in Cairo.

Subsequent affiliation to the Ministry of Culture with its new name in 1959, the orchestra has been playing a major role in classic music activities in Egypt. In addition to its regular, Symphonic concerts it has accompanied the foreign and local Opera and Ballet seasons in the old Opera House with companies such as the Bolshoi, Kirov and recently The London City Ballet in the new Cairo Opera House.
Since 1990 the Cairo Symphony Orchestra became part of the new National Cultural Center and performed in all Opera Productions in the new Cairo Opera House, such in Operas as Figaro. Aida , Carmen, Tosca and Don Giovanni as well as Productions of the Cairo Opera Ballet Company including Don Quixote and Romeo & Juliet.
The orchestra has performed under guest conductors of international caliber such as Charles Munch, Carlo Zecchi, Otokar Trihuk, Ole Schmidt and Graham Bond.

Well known composers as Aram Khatschatruian, Boris Papandopulo and Ahmed Adnan Saygun have conducted the Cairo Symphony Orchestra with programs of their own works.

Under its recent music director Ahmed Elsaedi, the Cairo Symphony Orchestra strikes a new dimension in both, repertoire and volume. Composers like Debussy, Ravel, Bruckner, Mahler, and Proke’s becoming regular names on the Cairo Symphony Orchestra repertoire.
Cairo Opera Choir:
Formed in 1956, the Cairo Opera Choir presents Choral works during the opera seasons, as well as some orchestral works with symphonic concerts. When first established, the Choir consisted of 80 singers led by Attora Cordonl, followed by Vittorio Barbieri and later Adriano Grosi.Today the Choir is coached and directed by Aldo Magnato.
Cairo Opera Dancing Theater:
In 1993, Walid Aouni Choreologist and artistic director founded the Cairo Opera Dance Theatre Company, with the foundation of 8 Egyptian dancers. "The Fall of Icarus" was the first professional performance of Cairo Opera Dance Theatre Company, in 1993, and was presented in Egypt during the 5th International Experimental Theatre Festival.

The production "Elephants Hide to Die" represented Egypt in the International Festival of Experimental Theatre in 1995, and won best performance stenography. Further more, this work also presented Egypt at the 5th International Music Theatre Workshop in Munich in 1996 that led to the membership of both composer and director to the IMTC. Internationally, "Elephants Hide to Die" was performed in June 1996 in Weimar and Munich, German, while "The Last Interview"(Trilogy III) was presented in October 1996 in Seoul, Korea.


The Cairo Opera Dance Theatre Company produces at least one premiere annually at the International Festival of Experimental Theatre in Cairo, Egypt.
Cairo Opera Children Choir:
The Cairo Opera House Children’s Choir consists of nearly 250 boys and girls, and was formed in July 1989, under the supervision of Dr. Ratiba El Hefny and the conduction of Maestro Selim Sahab.
The Choir presents a repertoire of traditional and modern songs, having a sound scientific and academic basis. Nevertheless, Its aim is not only artistic performance, as educational, social and national objectives are also being met. Cultivating an artistically aware generation of children, whom are capable of social involvement and who develop a strong national identity, is by far one of the most noble aims of the Cairo Opera House.
Proficiently, the Cairo Opera House Children’s Choir participated in Opera productions of "Carmen", "La Boheme", and the Operetta "Sheherazade", as well as a few others. The choir also took part in Arabic music concerts.
The Opera Museum:
The Opera Museum which is located on the first floor of the Opera House is divided into two wings. The first wing is completely devoted to documents relating the history of the Royal Cairo Opera House. It was built in 1869 during el Khedive Ismail’s reign by Italian architects Avoscani and Rossi.

On display are rare photos of the building, including some of the night the Royal Cairo Opera House burnt down in 1971, photos of several of the most important artistic performances, and a number of brochures of the concerts given at the Royal Cairo Opera House. Unfortunately, nothing else could be rescued from the fire except for two statues by artist Mohamed Hassan and a small model of the opera.


The first wing also exhibits costumes, jewellery, and musical scores of the opera Aida. Some historical documents written in Italian about the artistic performances of the Royal Cairo Opera House from 1869 until 1907 are shown as well.


The second wing is entirely devoted to the New Cairo Opera House which was inaugurated in 1988. There are several posters of the most important artistic performances of all the opera’s theatres: Main Hall, Small Hall, and Open Air Theatre, and brochures of the renowned international artistic companies that performed in Egypt.


Visitors can also see a huge nay (oriental flute) about 10 cm wide and more than 2 m long. It is made of ornamented wood. Another rare piece is a piano with additional keys on its keyboard allowing for oriental tunes to be played. There are costumes given to the New Cairo Opera House by the Vienna State Opera, and a model of the New Opera House buildings and photos while it was under construction.