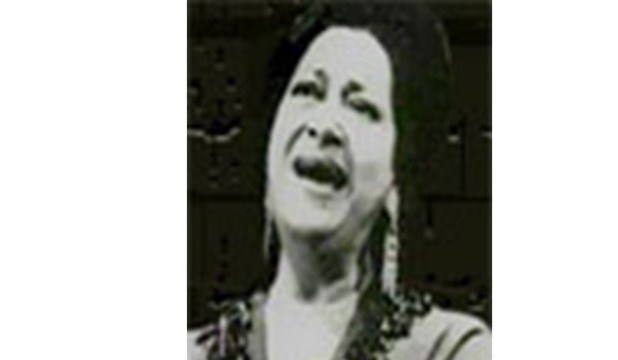 Egyptian-born voice of Arabs Umm Kulthoum(1898-1975):
Late Lady of the Arabic Song Umm Kulthoum is the Arab world’s most famous and distinguished singer of the 20th Century.
Background:
Umm Kulthoum was born in Daqaheleya Governorate, the Delta, in a family of talented born musicians. Her father was a recitor of religious poems and songs. She took after him in the purity and strength of voice.
Adventing to Cairo in 1923, she became a disciple to the greatest musicians of the age. She later on made her public appearance and had recordings and discs of her own. The introduction of the broadcasts served the fame of Umm Kulthoum all over the Arab area.
That wonderful lady was awarded the most sublime of medals and decorations in Egypt, some Arab and European countries. She was called "The Star of the Orient" and "The Lady of the Arabic Song".
She died on February 3, 1975, to conclude an eventful life of creation, imagination and magnificence. Ask some lovers even nowadays; she still has to be there for them. Opening two days prior to her birthday (31 December) the Kawkab Al-Sharq (Star of the Orient) Museum is a state-of-the-arts project celebrating the life and work of the legendary singer Umm Kulthoum (1898-1975).

She cultivated the position of spokeswoman for various causes. She advocated governmental support of Arabic music and musicians, she endowed a charitable foundation and, most importantly, after the Egyptian defeat in the 1967 war, she began a series of domestic and international concerts for Egypt. She travelled throughout Egypt and the Arab world, collecting contributions and donating the proceeds of her performances to the government of Egypt.These concerts were much publicized and took on the character of state visits. Umm Kulthum was entertained by heads of state, she toured cultural monuments, and, in interviews, repeated her views concerning the importance of support for indigenous Arab culture. More than a musician, she became ’the voice and face of Egypt’."