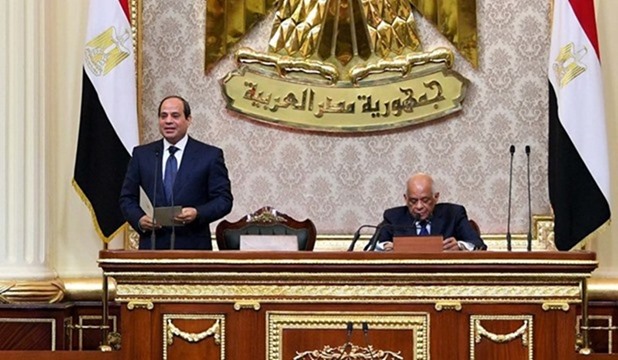 The House of Representatives held a special session on Saturday 2/6/2018 during which President Sisi was sworn in.

President Abdel Fattah El Sisi arrived at the venue of the House of Representatives in downtown Cairo to take the constitutional oath before the parliament for a second term in office.

The military band played the national anthem upon the arrival of the president.

Dr Ali Abdel Aal ,the Speaker of the House of Representatives said "I received a message from the head of the National Election Authority with an attached decree no. 57/2018 whose second article entails the declaration of electing President Abdel Fattah Saeed Hussien Khalil El Sisi, widely known as Abdel Fattah El Sisi, for a second term in office,”.

The president read out the constitutional oath: "I swear to god to maintain the republican regime, to respect constitution and law, to fully preserve the people's interests and to protect the nation's independence and its territories".

Following Sisi's constitutional oath, House of Representatives Speaker Ali Abdel Aal welcomed the president paying tribute to Egyptians who turned a blind eye to calls for boycotting the presidential elections and took to the streets to cast their votes in free elections.

Abdel Aal said the Egyptians voted for President Sisi in recognition of his efforts in leading the nation and making great achievements.

He said the Egyptians have proven their ability to iron out hurdles and address all problems that only make them more coherent.

Abdel Aal made it clear that the national unity is a must for continuing the construction process, stressing the importance of staying away from fanaticism, renewing the religious discourse and using the latest tools of information technology.

President Abdel-Fattah El-Sisi said he would be “president of all Egyptians; those who accept me and those who oppose me,"

"Egypt is for all…No one will be excluded except those who have chosen terrorism, violence, and extremism as a way to enforce their will and reign," President Sisi said in a televised speech in front of the House of Representatives, where he was sworn in mark the start of his second four-year term.

President Abdel Fattah El Sisi left the House of Representatives headquarters after taking the constitutional oath for a second term in office.

The national anthem was played while President Sisi was leaving the parliament.