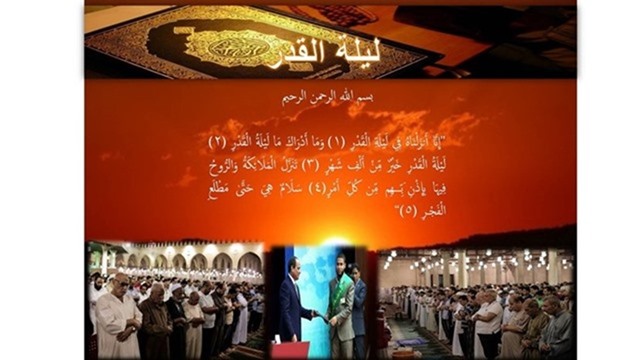 Lailat al-Qadr is one of the blessed and virtuous nights of the month of Ramadan. It is the night of the absolute connection between the earths and the heavens. It is the greatest  and most significant night that earth could witness. It is The night when Quran was first  revealed and descended on  our prophet Muhammad peace be upon him . It was mentioned  in  Quran,  as said   by Allah the Almighty in Surat al - Qadr

Lailat ElQadr is a great night and is better than a thousand months. The Prophet, peace be upon him, ordered us to investigate it  in the last ten days of the holy month of Ramadan and to revive it; and the winner is the one who manages to revive it with faith  and the deprived of its blessings and the forgiveness of God is a loser.  Abu Hurayrah (may Allah be pleased with him) said: The prophet (peace and blessings of Allah be upon him) said: Whoever prays  in Lailat ElQadr having deep faith in Allah  ,all of his sins will be forgiven.

Asking what to say in Lailat ElQadr, the prophet said: Oh God, you  are always generous and  kind  enough to  pardon and forgive,  pardon me.(Narrated by Ahmad and Ibn Majah and Tirmidhi)

There are signs that appear during  that night, and  signs after it is done. As for the signs during it, as narrated by Ahmad from the hadeeth of 'Ubadah ibn al-Saamit from the Prophet (peace and blessings of Allaah be upon him): "The night of Laylat al-Qadr is pure, as if it were a shining moon, neither cold nor hot.

As for the sign that comes after it is done, it is that the sun rises on the morning of that day, with  no rays coming   from it, as is proven in the hadeeth narrated by Muslim.

The State holds a celebration organized by the Ministry of Awqaf on the night of 27 Ramadan each year,  a large group of ministers and officials witness it, and the President of the Republic is always keen to attend it.

During the ceremony, the state honors the memorizers of the Holy Quran and the winners of the international competitions for memorizing and interpreting the Quran.  The President of the Republic  makes a speech in this occasion.

Muslims in Egypt hurry to the mosques to win the virtue of the night of power. The mosques receive them   equipping the squares, to accommodate the hundreds of thousands of worshipers.

Amr bin Alas mosque  is one of the most famous mosques in Egypt that  receives  Muslims  and  witnesses  the largest gathering of worshipers, who pray there to realize  the night  of power. The Mosque of Amr ibn al-Aas is the first Islamic mosque in Egypt, which witnesses the influx of hundreds of worshipers  who come accompanied by their children to train them on  obedience and worship , and learn and read  Quran.

There are also other mosques that witness influx of  worshipers  in Lailat ElQadr like Al Azhar mosque , Sultan Hassan mosque, Refai mosque and Qaed Ibrahim.