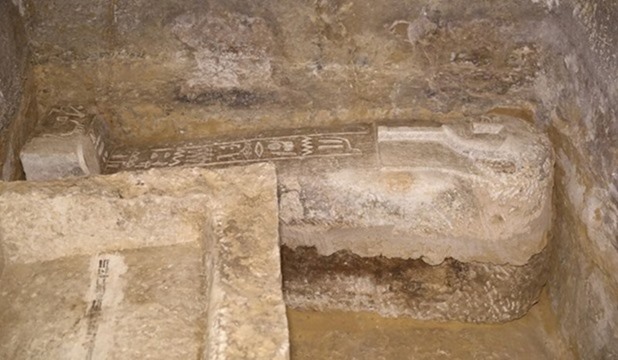 Just south of Unas Pyramid in Saqqara necropolis in Giza the air is buzzing with people who flocked to the site, trying to catch a glimpse of the new discovery to be announced at a press conference.

Minister of Antiquities Khaled El-Anany announces the beginning of the excavation of a mummification workshop discovered along with a communal burial place, consisting uniquely of several burial chambers and dating to the Saite-Persian Period (664-404 BC).

The work is being carried out south of the King Unas Pyramid in Saqqara by an Egyptian-German mission from the Tübingen University.

“A collection of 35 mummies has been uncovered along with four sealed sarcophagi that are to be opened soon to explore what lies inside,” El-Anany said. He added that one of the most important items uncovered is a gilded sliver mummy mask found in a burial chamber off the main shaft attached to the mummification workshop.

Early studies show that the mask belongs to a person who held the titles ‘the second priest of Mut" and "the priest of Niut-Shaes". Preliminary microscopic examination suggests that it is made of gilded silver, and the eyes are inlayed with a black gemstone (possibly onyx), calcite and obsidian.

The wig is also inlayed with gemstones that were once embedded in coloured pastes. The mask measures 23 x 18.5 cm. A research and conservation project is currently being planned for the mask.

Hussein told Al Ahram that the mummification workshop, a rectangular building constructed with mud bricks and irregular limestone blocks, was found 30 meters beneath the ground.

A fourth mummy is found to the north of that sarcophagus. A large number of faience ushabti figurines were also found along the northern side of the sarcophagus.

Hussein pointed out that the middle wooden coffin, on top of the sarcophagus, is badly damaged, and the mummy inside it has a gilded mask that was found on top of the face of the mummy.

The wooden coffin was once plastered and painted with an image of the goddess Nut, the mother of the god of the dead, Osiris.

The theophoric name of the owner of the mask includes the name of the goddess Neith, the patron goddess of 26th Dynasty.

Pieces of the painted plaster carrying the rest of his name are still missing, and the mission is collecting more of them in order to read the full name of the deceased.

Mostafa Waziri, the secretary general of the Supreme Council of Antiquities, told Al Ahram that this discovery is the first to be found since the last excavation work carried out by Maspero in 1900 where he found a several burials.

Waziri describes the discovery as important and unique, adding that German-Egyptian mission is very lucky to find such workshop.

He pointed out that the discovery is still at its beginning and more finds are expected.