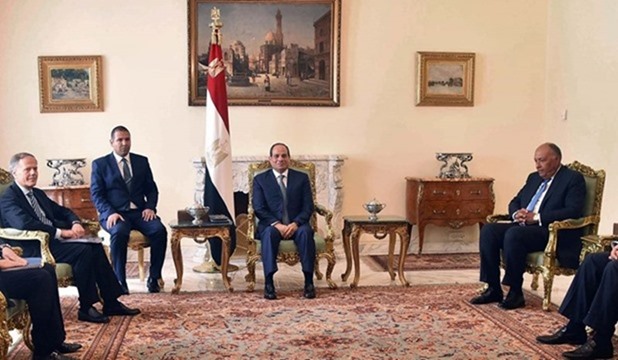 Italian Foreign Minister Enzo Moavero Milanesi arrived on Saturday 4/8/2018 at Cairo International Airport on his first visit to Cairo since assuming office. Milanesi's visit is considered the first at this level since 2015 as the two ministers probed boosting bilateral relations in all fields besides regional issues of mutual interest.

During his stay in Cairo, Milanesi meets with President Abdel Fattah El Sisi and a number of senior officials.

The Italian diplomat held political talks with his Egyptian counterpart Sameh Shoukry, during which both sides tackled bilateral relations and ways of boosting them.

Shoukry expressed hope that the visit would contribute to bolstering relations between the two countries at the political, economic, security and cultural levels.

The two ministers reviewed the main aspects of the bilateral economic relations as Italy is considered Egypt's second partner at the European level and the fourth internationally with the trade exchange volume hitting 4.75 billion euros.

The Egyptian top diplomat hailed the decision made by the Italian government to inaugurate an office of the Financial and insurance products and services (SACE) in Cairo, noting that the agency provides guarantees to the Italian firms aspiring to invest in the country.

He further lauded the pivotal role played by Italy in supporting Egyptian endeavors to turn Egypt into a regional hub for energy trading, the spokesman asserted.

Both ministers discussed means of enhancing bilateral economic and development cooperation as Milanesi said that his country looks forward to pumping more funding to support the small and medium enterprises (SMEs) sector in Egypt besides backing agriculture.

The meeting took up the latest developments in Libya in light of the attention paid to the Libyan crisis by both countries as Shoukry reviewed Egypt's endeavors to achieve stability in the violence-hit Arab country.

He further welcomed cooperation with the Italian side to reach a comprehensive formula to maintain political stability and security in Libya besides encountering terrorism.

For his part, Milanesi wished that the visit contributes to boosting the joint ties to fulfill the aspirations of the Egyptian and Italian peoples.

Speaking in a press conference, Sameh Shoukry said this is the first visit by the Italian top diplomat to Egypt since 2015.

"We're working hard to overcome the challenge that has spilled over into bilateral relations," Shoukry said.

Italy is an important Mediterranean partner of Egypt, especially at the economic level, he noted.

Shoukry said he discussed with Moavero the situation in Libya, with both stressing the need to act in line with a plan by the UN envoy to eliminate terrorism and enable state institutions to carry out their duties.

"We also discussed Palestinian developments and the two-state solution," Shoukry added, reiterating calls to establish an independent Palestinian state on the pre-1967 borders.

Figuring high in the meeting were also efforts exerted by Egypt, as a host and transit country, to curb an influx of illegal immigrants since September 2016.

He particularly touched upon efforts by the Egyptian Armed Forces to monitor the shores.

He told reporters that this is his first visit to Egypt as foreign minister.

Moavero said the meeting with Shoukry also focused on cultural cooperation between their countries.

President Abdel Fattah El Sisi asserted that Egypt is keen on fostering cooperation with Italy in the different fields, especially the economic, trade and investment ones.

Also, he hailed fruitful and constructive cooperation with Italian companies, in particular those working in the petroleum and natural gas sectors.

President Sisi went on to say that Cairo looks forward to boosting cooperation with the Italian oil companies, with the aim of helping the country turn into a regional power hub.

During the meeting, President Sisi praised strong relations binding the two countries, stressing that Cairo and Rome are interested in bolstering bilateral cooperation during the coming period.

For his part, Milanesi expressed happiness about his visit to Egypt, underlining that the Italian government is willing to push forward ties with the Egyptian government, in addition to strengthening bilateral coordination on a number of regional issues of mutual concern.

The meeting reviewed a host of files related to bilateral relations, as president Sisi affirmed that Egypt is eager to uncover the circumstances surrounding the death of Italian researcher Giulio Regeni.

The Italian minister commended positive cooperation between the Egyptian and Italian authorities in this case, expressing his hope that such joint efforts will lead to the truth, the spokesman said.

The two sides touched on a number of regional issues, notably the Libyan crisis, where they asserted the importance of supporting efforts aimed at reaching a political settlement and breaking the ongoing deadlock, as well as backing the UN envoy's endeavors in this regard.

In this respect, Italy's top diplomat lauded strenuous efforts exerted by Cairo to unite the Libyan military, saying that such a move could help strengthen the capabilities of state institutions and restore security and stability in the North African country, the spokesman noted.

President Sisi stressed Egypt's firm stance on the Libyan crisis, which is based on adherence to the territorial integrity of Libya and respecting the will of the Libyan people that will be reflected in the upcoming elections, in addition to backing Libya's national army.

The meeting tackled the issue of illegal migration, with President Sisi pointing out to effective measures taken by the state at the legislative and economic levels to fight human trafficking and illegal migration and police Egypt's borders and coasts, which in turn contributed to stemming the flow of illegal migrants across the Egyptian coasts since September 2016.

In a related context, the pair called for adopting an overall strategy to handle the illegal migration issue, as well as settling ongoing regional crises and pressing ahead with regional development efforts.

During his visit to the museum, accompanied with Antiquities Minister Khaled Anani, Secretary-General of the Supreme Council of Antiquities Mostafa Waziri, and others, Milanesi hailed the Italian-Egyptian historic ties binding the two countries.

The Italian top diplomat toured the museum's halls and visited the exhibition of the artifacts discovered by the Italian missions working in Egypt.

He also paid a visit to an exhibition of antiquities restored from Italy, which was opened by the Antiquities Ministry on July 4.