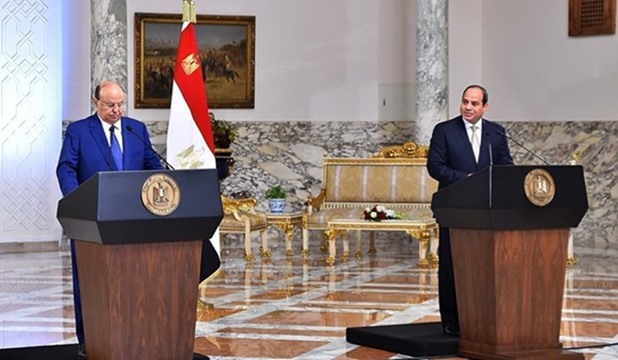 President Abdel Fatah El Sisi receives on Monday 13/8/2018 Yemen's President Abd-Rabbu Mansour Hadi at the Ittihadiya presidential palace, which will be followed by a press conference.

They discuss during the meeting the situation in Yemen and its latest developments.

Yemeni President arrived in Cairo to participate in several meetings, which held between President Sisi and Hadi during his two-day visit, in addition to his meeting with the House of Representatives Speaker Ali Abdel Aal.

It is the third time for Hadi to visit Egypt since he came to power in March 2015 as he visited Sharm El- Sheikh to participate in the Arab Summit’s events, and attended the Suez Canal inauguration in August 2015.

The two Presidents held a bilateral meeting followed by extensive discussions between the two countries' delegations. They discussed mutual cooperation between the two countries to enhance the protection of maritime navigation in the Red Sea and Bab al-Mandab Strait to avoid being negatively affected by the current situation in Yemen.
The meeting also tackled a number of issues related to their bilateral relations and means  to support Yemen so as to overcome the crisis. President Sisi underlined Egypt's readiness to increase the volume of training and support provided to build the potentialities of Yemeni cadres in various fields with increasing number of scholarships and training programmes, beside  therapeutic grants to receive and treat Yemeni injuries.

President Hadi reviewed the developments in Yemen and his government's efforts to restore peace and stability, as well as the challenges facing Yemen as a result of the war that has been going on for years and its disastrous consequences on the Yemeni people.

President Sisi stressed Egypt's full support to the efforts of the legitimate government to restore the solidarity of the state and eliminate the tragic humanitarian situation in Yemen.

He pointed to the inevitability of pursuing the UN-led efforts to reach a political solution to the crisis in accordance with the resolutions of the International Legitimacy , the Gulf initiative and the outcome of national dialogue, in  a way to start of the reconstruction process as soon as possible andbring to end the human suffering of the brotherly Yemeni people.

After the meeting, President Sisi and the Yemeni President witnessed the signing ceremony of a memorandum of understanding between the Central Bank of Egypt and the Yemeni Central Bank on cooperation in the banking sector, especially in the field of exchange of skills and training of officials in this sector.

The two Presidents then held a joint press conference where Sisi  delivered a speech in which he said that the security and stability of Yemen is of utmost importance not only to the national security of Egypt but also to that of the whole region.

Therefore, we categorically reject having Yemen as a center of influence for non-Arab forces or a threat to the security and stability of the brotherly Arab states, or freedom of navigation in the Red Sea and the Strait of Bab al-Mandab. In this regard, Egypt always highlights  its genuine commitment to support the  stability of Yemen and its territorial integrity and legitimate Yemeni government to overcome the current challenges and attempts to  violate the future of the brotherly Yemeni people .. Egypt's commitment to Yemen stems from the fundamentals of its foreign policy and witnesses of extended decades of struggle and joint cooperation.