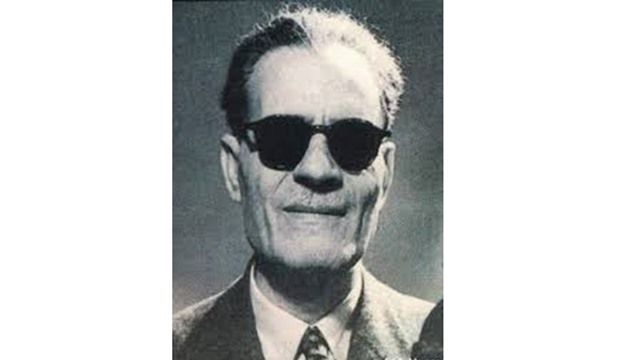 Taha Hussein was born on October 28, 1898, in El kilo village (1kg) near the town of Maghagha in AI-Minya Governorate, Upper Egypt, and grew up, the seventh of thirteen children, in a lower middle-class family. At the age of three, he contracted a simple eye infection and, due to faulty treatment by an unskilled local practitioner, he became blind, which caused him great anguish throughout his life.

University Education:
In 1908, he was very keen on joining Fouad I University (later on Cairo University) , secular university, that was a part of a national effort to promote education in Egypt under British occupation. He was blind and poor, but overcoming many obstacles, he was accepted in that university. He later stated, in his book "AI-Ayyam" (The Days), that the gates of knowledge were opened widely for him since joining Fouad University. He was the first graduate of this University to receive a PhD. His doctoral dissertation, awarded in 1914, was on skeptic philosopher and poet Abu- Alalaa Al-Ma’arri.

His next big step was travelling to France for more studies in an educational mission of Fouad I University. Although his blindness caused him great torture, aggravated by a careless brother, presumably sent to take care of him; Hussein’s time in Montpellier proved to be the days of his life. He worked very hard at his studies, learning excellent French but the biggest bonus of all was his meeting with his ’sweet voice’, Suzanne, who came to read to him since not all the references needed were available in Barilla. She later became his wife, his mentor, advisor, assistant, mother to his children, great love and best friend. He states that since he first heard this ’sweet voice’, anguish never entered his heart." After his death, she wrote "Ma’ak" (With You), published in Arabic; a touching remembrance of their life together.

Sorbonne Ph.D.
After obtaining his MA from Montpellier University, he went on to complete another PHD. , at Sorbonne University in Paris, one of Europe’s most prestigious universities. Taha Hussein was the first Egyptian , and the only member of the mission to succeed in obtaining first MA and PhD from France. His doctoral dissertation, written in 1917, was on lbn Khaldun, the fourteenth century Arab historian, the founder of sociology.

In 1919, he came back to Egypt with his wife where he was appointed a professor of history at Fouad I University. Through his own will and craving for knowledge, he grew to be the leader of the Arab cultural renaissance.

Education for All:
In 1950 Taha Hussein was appointed as Minister of Education and he managed to put his motto "Education is like the air we breathe and the water we drink" into practice.Indeed, million of Egyptians owe their literacy to Taha Hussein.

Suzanne had two children: Amina who died aged 46 and her younger brother Moenis who now lives in France. His daughter, Amina, was among the first Egyptian women to graduate from University. She and her brother Moenis, later, translated his novel Adib (The Intellectual) into French. This is a deeply sympathetic story describing the cultural shock suffered by an Egyptian in the years he spent in France. Taha Hussein lived a life of constant struggles - political, social and personal.

Three Kinds:
Taha Hussein’s works can be divided into three categories: scientific study of Arabic literature and Islamic history; creative literary works with social content combating poverty & ignorance, and political articles. The latter he published in two papers of which he was editor-in-chief, after being expelled from his post as professor of Classical Arabic literature at the Egyptian University. His expulsion came as a result of public reaction to his book ’On Pre-Islamic Poetry’, published in 1926, which gave full expression to his modern method of literary criticism.

His Novels:
His novels express an astounding sensitivity, insight and compassion in that age for a person with his background. His arguments for justice and equality are supported by deep and honest understanding of Islam. Equally remarkable is his sympathy with his downtrodden compatriots and his understanding of the deepest emotions and thoughts of woman as a girl, lover, wife and mother.

Dean:
Taha Hussein, who had to bear the brunt of conservative attacks and confront enemies of his reforms, enjoyed the affection of his students & colleagues. During his life time, he was elected member of many educational academies in Arab countries, and was honoured by many international institutions.

The American University in Cairo (AUC) paid no heed to Egyptian Premier Isma’il Sidqi, when he warned against offering employment to Taha Hussein. Its Ewart Hall, where AUC holds its extra-curricular activities, was teeming in the 1930s with listeners eager to hear him and to declare him Dean of Arabic Literature.

The greater part of Taha Hussein’s canon is basically influenced by Greek culture. He issued "Selected Pages" from Greek Dramatic poetry (1920), "The Athenian System" in 1921, and "Leaders of Thought" in 1925. Thus, the link between his Arabic culture with that of Greece was a turning point as a thinker.

The first book was an incomplete attempt at an expose of Greek poets and their works. The second book was a meticulous translation of one of the most important texts of Greek history of civilization. He deals with the religious impact on thought in the Middle Ages, then moves on to the Modern Ages of multi- influences.

Thus, Taha Hussein was not merely influenced by Greek thought in his literary work but also in his books on politics and civilization. The books he issued following his return from Paris greatly influenced modern Arabic classical literature.

He waged many battles for enlightenment, the respect of reason and thought, and women’s emancipation. The first of these was in 1926 when he issued "Pre-Islamic Poetry", which was highly controversial in both politically and literary circles. It aroused wide scale front page arguments in newspapers between pros and cons. In self-defense, he argued that he adopted a scientific method of approach in his treatise on Pre-Islamic poetry. That method, he said, was adopted by western philosophers, scientists, and men of letters who followed the French philosopher Descartes in his reasoning in search for the truth of beginning. It renovated science and philosophy and changed the outlook of men of letters and artists in the West.

He was awarded honorary doctorates from French, British, Spanish and Italian universities. President Gamal Abd AI-Naser bestowed on him the highest Egyptian decoration, normally, reserved for heads of the states. In 1973, he received the United Nations Human Rights Award.

Taha Husein died in October 1973, immediately after witnessing his country’s victory in its last war against Israel. He died in his home, alone with his "sweet voice"; Suzanne. She wrote: "We were together, alone, close to an extent beyond description. I was not crying - the tears came later. Each of us was before the other; unknown and united as we had been at the beginning of our journey. In this last unity, in the midst of this very close familiarity, I talked to him, kissing that forehead that was so noble and handsome, on which age and pain had not succeeded to carve any wrinkles, and no adversity had managed to cause to frown - a forehead that still emanated light". "For before anything, and after everything, and above all things, he was my best friend, and he was, my only friend".