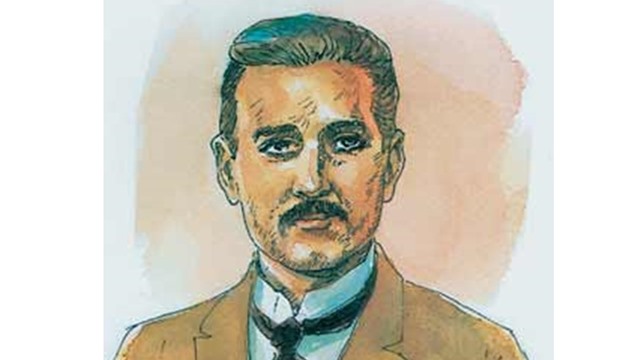 Mahmoud Taymour was born on June 6, 1894 at "Darb Saada" in "Moski" an old district in Cairo. He was brought in a well-off family interested in literature and arts.

His father Ahmed pasha Taymour (1871-1930), was a writer and historian interested in theatre. He owned a large library which was later donated to Egyptian National Library. Mahmoud Taymour had the chance of reading in various sciences, arts and poetry.

First: His father who encouraged him to read since his childhood.
Second: His elder brother Muhammad Taymour (1892 - 1921) had a great effect on Taymour’s literary character. His elder brother had studied in Europe and came back with brave ideas, which impressed him.
Third: His own extensive reading in various fields of knowledge.
Fourth: Special incidents in his life that affected his career. He suffered an illness which prevented him from pursuing his higher studies as a result, he was confined to home, reading and studying on his own.

In his early youth, Mahmoud Taymour read Maupassant and Checkov and was influenced by their works. He believed that " Maupassant was the leader of short story. Writing like his elder brother, he was in close touch with European literature, as he lived in Switzerland for more than three years.

His attitude towards Realism:
Mahmoud Taymour’s first writings had a romantic trend. As a young man, he was sensitive to the subjective and lachrymose aspects of life and art.

But he soon deserted this introvert trend in favour of a realistic outlook. He then realized that the closer the short story is to real life, the more effective it will be. This attitude marked the beginning of his journey towards realism.

Owing to Mahmoud Taymour’s frequent travels, his opinion, thoughts and style became mature. Therefore, realism with him took an analytic trend. With political development it took a pan-national and Arab trend. He even went further to address problems and issues of man in general. He believed that for literature to be eternal, it should be a faithful expression of man.
As a person, Mahmoud Taymour was simple, humble and a real gentleman. However, he always felt a victim of injustice and ingratitude. This was due to his introvert nature and isolation from the literary events. In spite of his solitude, he was most interested in the literary production appearing in print. He used to have his books published at his own expense and sent to those who requested them especially emerging writers.

He never took literature as a profession, but rather lived as a loving amateur, writing, publishing and giving away his books as gifts depending on his own family rich resources. He frequently received young writers at his palace in Zamalek, modestly encouraging and listening to them.

He was an affable and easy-going person. Mahmoud Taymour wrote blank verse, as well as recollections and reflections on life, society and his travels. He also wrote critical essays and some plays. However, the short story was the area where he excelled.

Mahmoud Taymour’s short stories:
He produced 20 collections including:
Satan’s Daughter
Features and Branches
Recovery of the Soul
Sheikh Goma’a and Other Stories
Literature and Literary men.
Abu Aly plays an artist.
To be filed in the mail.

Sheikh Goma’a was his first production in 1925. Sheikh Goma’a’s character was a real person who worked as a guard in his own manor. He met him while spending a holiday in the countryside.

Taymour was over 80 when he died in 1973 following a lifetime rife with creativity leaving behind a rich legacy of short stories, plays and novels, in addition to literary biographies and criticism.