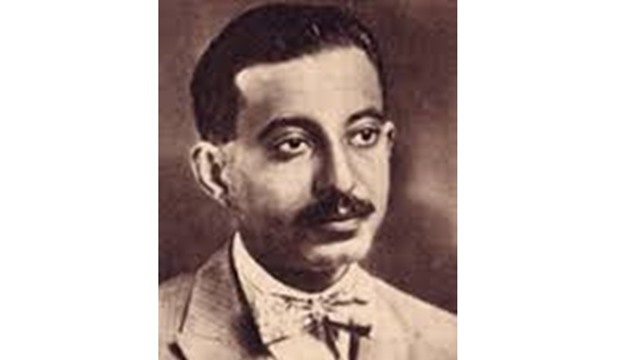 Ibrahim Abdel Qader Al Mazni was an outstanding pioneer of the flourishing literary movement of the early 20th century. He was an eminent novelist, short story writer, essayist, translator and poet. He was born in Cairo on August 6, 1890, in a religious environment. His father was an attorney before Sharia courts. He was also in charge of Sharia (Islamic Law) affairs at the King’s palace.

His father died while he was still a child. Following his failure to join the schools of law and medicine thereafter, he enrolled in the teachers’ college where he graduated and then taught translation. Al Mazni was not convinced with a post that limited his freedom, so he resigned. He worked as a teacher and a headmaster at private schools. In 1919, with the emergence of the nationalist movement, he left teaching for politics and the Press. He contributed to many newspapers, including Al Dostour, Al Akhbar and Al Balagh. He wrote essays, short stories and reviews. His involvement in the press was one of the most productive and fertile periods of his career, where he produced a wealth of multi-sided literary works.

Influencing Factors
Several factors have contributed to bring about Al Mazni’s outstanding status in the realm of literature.
1. His instinct propensity and dedication to literature
Al Mazni had an instinctive love and deep interest in literature.
2. This propensity was developed through his readings of the works of prominent Arabic classical writers, such as Al Jahez, Ibn Al Roumi, Al Sharif Al Radhi, Abul Alaa Al Ma’arri, Al-Asfahani and Ibn Al Faredh.
3. His perfect command of English enabled him to study thoroughly masterpieces, especially the romantic and realistic schools.
4. The religious environment where he was brought up stimulated him to conduct thorough study and comparison of religions.
5. His involvement in the press and teaching obviously influenced his simple and clear style of writing.

Al Mazni as a Poet
His poetry expressed a truthful and genuine nature and an outstanding ability. Moreover, he abandoned poetry because of his preoccupation with the nationalist activities of the 1919 Revolution. Dr. Muhammad Mandour, a renowned Egyptian critic, believes that by God’s Blessing, Al Mazni was made to give poetry for prose, for Arabic literature was rather influenced by his prose which was the best written at his time. His poetry is compiled in a collection of poems in two parts entitled "Al Mazni"

Al Mazni as a Prose Writer
Al Mazni’s personality had a clear effect on his literature in general and his prose in particular. He had a first-hand experience of the agonies of life as inflicted on himself and his nation that suffered from ignorance, disease, deprivation and colonialist domination. The focus in his literature was on his own experience and that of his nation. His prose writings covered various genres including essays, novels, short stories and translations.

Al Mazni as an Essayist
Al Mazni is considered one of the early pioneers who promoted the art of essay writing. He carefully selected his topics. His essays covered several themes such as:
1. His autobiography
2. Surrounding environment
3. National and social topics
4. Criticism

Al Mazni as a Translator
Al Mazni is considered the most outstanding translator known in modern times. He is also known to be most accurate in selecting phrases and vocabulary in translation. The most important works he translated included the plays: "The Fugitive Woman", "The Son of Nature" and "The School for Scandal".

His Major Works
"Al Mazni’s Collection of Poems", "The Poetry of Hafez ","Poetry, Its Aims and Media", "The Harvest of Dry Stalk", "In Vain", "Trip to Hegaz", "Life Story" and "Bashar Ibn Bard"

His Novels
"Ibrahim Al Kateb", "Ibrahim II", "Three Men and a Woman", "Recurrence All Over Again" and "Mido and Company"

His Plays
"The Woman’s Institute or the law of obedience"
Short stories and Collections of Narrative Essays
"Kaleidoscope", "The Spider Web", "On the Road", "By the Way", "From the Window and sketches from Life", "Al Mazni’s Talks", "Selection of Al Mazni’s writings" and "The Way of Life"