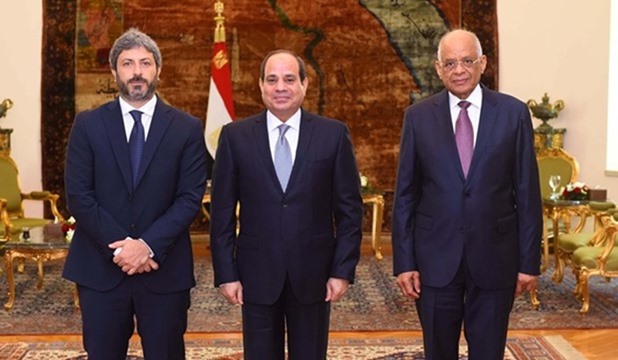 During a meeting with Italian Chamber of Deputies Speaker Roberto Fico, in the presence of House of Representatives Speaker Dr Ali Abdel Aal and the Italian ambassador in Cairo, the president said Egypt is looking forward to promoting parliamentary ties and exchanging more visits by officials from both sides, Presidency Spokesman Bassam Radi said.

The Italian parliament speaker's visit, the fourth by a high-level Italian official to Cairo in less than two months, is considered a good opportunity to push forward cooperation and exchange views at all levels, President Sisi said.

Fico asserted long-lasting historical relations between Egypt and Italy, underscoring their development recently particularly in the economic and trade fields. He expressed his wish for more joint cooperation in the parliamentary field.

They tackled the murder of Giulio Regeni, the Cambridge postgraduate Italian student who was kidnapped and murdered in Cairo, during the meeting. President Sisi stressed Egypt's keenness to reach the truth about this crime. The Egyptian authorities are committed to full transparency with the Italian side and the Egyptian Public Prosecution is cooperating with its Italian counterpart in this respect, the president said, adding that he has given directives to iron out any obstacles facing the ongoing investigations in order to settle this case and reach the perpetrators to bring them to justice.

The Italian speaker voiced his country's appreciation of Egypt's stance as regards reaching the truth in this case through joint cooperation, Radi said.

The meeting also covered a number of other files of mutual concern particularly illegal immigration and the active measures taken at the legislative and economic levels and securing borders which have led to halting the flow of illegal immigrants from Egyptian shores since 2016.

The crises in Libya and Syria and anti-terrorism efforts were also discussed during the meeting, he added.