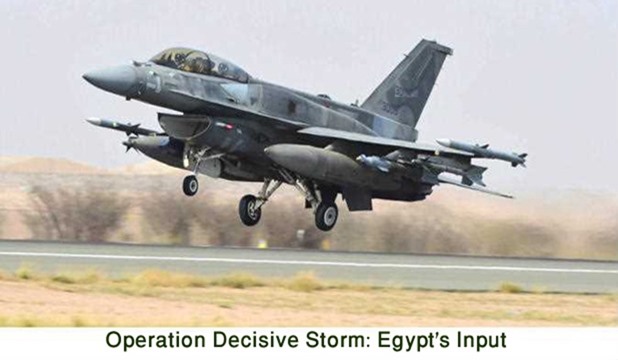 Egypt uses its input in Operation "Decisive Storm", represented in its Air Force and Navy, to regain stability in Yemen. It seeks to prevent the country from disintegrating, rein in Iran and prevent it from setting up a Shi’ite empire, from controlling Bab al-Mandab in the south and from stretching north to Iraq, Syria and Lebanon and finally to help protect the legitimate regime of Yemeni President Abdrabbuh Hadi.

Egypt believes that Yemen’s instability poses a threat to national and regional security. In his speech either at the opening of the Arab Summit in Sharm al-Sheikh, on 28 March, 2015 or in his remarks following the meeting of Supreme Council of the Armed Forces on 4 April, 2015, President Abdel Fattah El Sisi said that instability in Yemen is jeopardizing security at both the national and regional levels, and a group of armed Yemenis are struggling to counter legitimacy, that a group of Yemenis are emboldened by foreign parties, that seek to exploit the situation in Yemen to gain a foothold in the Red Sea and control international waterways in the region.

By quickly joining Operation “Decisive Storm”, Egypt has validated President Sisi’s “Just Enough Time to Cross the Distance” doctrine, which he has established with the purpose of protecting Arab Gulf countries from situation such as that in Yemen. With its accumulated experiences, not only does Egypt rely on a military solution, in cases of internal fighting or instability, but has left the door wide open for a reasonable political solution.

4) Removing threats to navigation in the Suez Canal and protecting Bab al-Mandab strait.

1) Egypt’s participation in Operation “Decisive Storm” is perfectly consistent with the principles of International Law, given that the Houthis are jeopardizing navigation in the Bab al-Mandab strait, which is strategically important to Egypt. It is also consistent with the provisions of the Arab Joint Defense Treaty which entitles Egypt to participate in a military operation in the case a threat is posed to an Arab country.

2) The UN Charter prevents member-states from participating in military operations within the borders of other member-states except in the cases; 1) when a treaty exists between parties, allowing military intervention in the case a country is attacked; and 2) when a request is made by the attacked party calling on other parties to intervene, which is the case in Yemen.

3) Egypt’s Constitution, approved in January 2014, provides in Article 152 that “The President shall not declare war, or send the armed forces to a combat mission outside the State borders, except after consultation with the National Defense Council and obtaining the approval of the House of Representatives by a majority of two-thirds of the members.

“In case the House of Representatives have not been elected, the Supreme Council of the Armed Forces (SCAF) must be consulted and the approval of both the Cabinet and National Defense Council must be obtained.”

Accordingly on 14 April, 2015, the UN Security Council, acting under Chapter VII of the Charter of the United Nations, adopted a resolution, submitted by members of the Gulf Cooperation Council, which “Demands that all Yemeni parties, in particular the Houthis, fully implement resolution 2201 (2015), refrain from further unilateral actions that could undermine the political transition in Yemen, and further demands that the Houthis immediately and unconditionally end the use of violence; withdraw their forces from all areas they have seized, including the capital Sana’a; relinquish all additional arms seized from military and security institutions, including missile systems; and cease all actions that are exclusively within the authority of the legitimate Government of Yemen.

The resolution further calls upon all Yemeni parties, in particular the Houthis, to abide by the Gulf Cooperation Council Initiative and its Implementation Mechanism, the outcomes of the comprehensive National Dialogue conference, and the relevant Security Council resolutions and to resume and accelerate inclusive United Nations-brokered negotiations, including on issues relating to governance, to continue the political transition in order to reach a consensus solution and stresses the importance of full implementation of agreements reached and commitments made towards that goal and calls on the parties, in this regard, to agree on the conditions leading to an expeditious cessation of violence, in accordance with United Nations Charter, and relevant Security Council resolutions, including this Resolution and Resolution 2201 (2015).

Since Egypt declared, on 26 March, 2015, that it was joining the Saudi-led military intervention in Yemen, fears have surfaced of repeating the mistakes of the 1960s, when Egypt intervened in support of the Yemeni Revolution in 1962. Many believed it wrong to intervene, particularly as Egyptian troops suffered losses in fighting at the time. However, as President Abdel Fattah El-Sisi put at the meeting of the Supreme Council of the Armed Forces on 4 April, 2015 the historical context and the determining factors leading to Egypt joining Operation “Decisive Storm” are not the same as before. This can be explained as follows:

2) The international community agrees that Operation “Decisive Storm” is inevitable to protect Yemen from disintegrating; particularly with the Houthis being in control, rejecting dialogue and resorting to arms and violence assisted in that by Iran and other regional powers. Egypt’s input has been part of a coalition that includes a number of Arab and other neighboring countries. In the 1960s, Egypt’s decision to intervene was unilaterally taken.

3) Egypt’s input is confined to securing Bab al-Mandab by Navy vessels and air force units. According to a Presidency statement release on 26 March, 2015, ground troops will intervene as needed. It is obvious that the current military intervention is different from that of the 1960s, when Yemen’s geography was a complete unknown. Now the case is different thanks to modern technology.

Egypt’s participation in Operation “Decisive Storm” is an indication that the country has returned to playing an effective role within the Middle East region. Accordingly, Egypt was able to convince Arab countries of setting up a joint military force to overcome the challenges facing the nation. These challenges have been cited in the speech given by President Abdel-Fattah al-Sisi at the opening of the 26th Arab Summit held in Sharm al-Sheikh on 28 March, 2015 as follows:

1) Some external parties are capitalizing on the situation in some Arab countries to interfere in their internal affairs or to polarize their citizens in a way that threatens our national security so that we cannot disregard its consequences on the Arab identity and the entity of the nation. Therefore they violated the sovereignty of these countries and started looting their resources and targeting their peoples.

2) It is no secret that restoring stability and security in Libya is not of paramount importance to Egypt only for the geographical neighborliness and historical bonds considerations but also for the whole province and the Arab region as a whole in light of the intricate threats and the unity of goal and future in addition to other considerations related to maintaining international peace and security that have become jeopardized by the developments in Libya and the growing danger of terrorism. This state of affairs requires extending all forms of assistance and supporting the legitimate Libyan government without delay to enable it undertake its role in establishing security and stability in all parts of Libya and in a way that activates its efforts in fighting terrorism and allows it to defend itself against the terrorist organizations.

3) The Syrian crisis became a catastrophe that causes pain to the international conscience. We have seen the consequences of this deteriorating situation which created a vacuum that was used by terrorist organizations so that the continuation of this regrettable situation became jeopardizing the security of the whole region. Egypt is dealing with the Syrian crisis from two angles; firstly it supports the aspirations of the Syrian people for building a democratic and civil State; secondly it stands up to terrorist organizations that became rife. Egypt is working at the same time to prevent the collapse of Syrian State institutions. Working to put forth a political framework that is adopted by the Syrians and approved by the regional countries and international community is an important step along the road of hammering out a political solution that puts an end to the ordeal of the Syrian people and achieves their aspirations in line with their free and independent will to build a democratic and national State.

4) We cannot but highlight the role of Egyptian diplomacy with regard to evacuating Egyptian citizens stranded in Yemen. All facilities have been provided to return them home safely in cooperation with neighborly countries.