Voting in Elections and Referendums –between Right and Duty 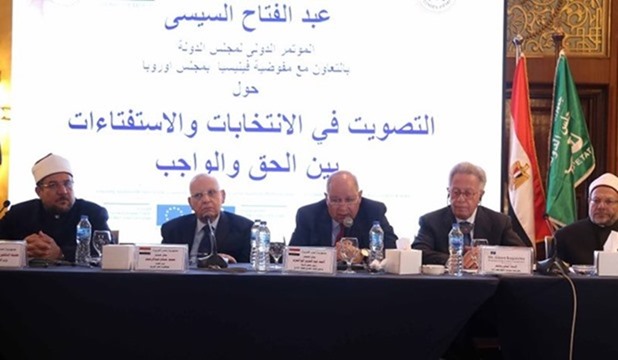 Under the auspices of President Abdel Fattah El Sisi an international conference, titled "Voting in Elections and Referendums –between Right and Duty" kicked off in Cairo on Monday 8/10/2018.

The high-level conference is organized by the Egyptian Council of State, in collaboration with the Venice Commission of the Council of Europe and the Arab Union of Administrative Judiciary (AUAJ).

The conference is attended by President of the Venice Commission Gianni Buquicchio, as well as Awqaf Minister Mohamed Mokhtar Gomaa and Egypt's Grand Mufi Shawqi Allam, several ministers and members of the judiciary from the Arab world and Europe, in addition to a number of judges at the State Council and university professors.

Speaking at the conference, AUAJ Chairman Counselor Ahmed Abouel Azem conveyed President Abdel Fatah El Sisi's greetings to the attendees and expressed his support of the conference and any future events related to the electoral process.

The conference will review international conventions and comparative research on the standards to enhance the principle of citizenship, Aboel Azem said.

He further stressed that the conference will come up with recommendations that will help increase voter turnout in elections and referendums, elaborating that the conference discusses "if the right to vote or not to vote is absolute or not?", as well as the citizens' obligations towards the state and their participation in the democratic process.

He said the conference will be a good opportunity for cultural interaction in the different judicial fields and exchange of experiences and best practices in order to get acquainted with the national laws of each country across the globe.

For his part, State Minister for Legal Affairs Amr Marwan posted the conferees on various reasons that affect voter turnout, stressing the role of civil society organizations to raise awareness among eligible voters of the importance of their participation in the voting process.