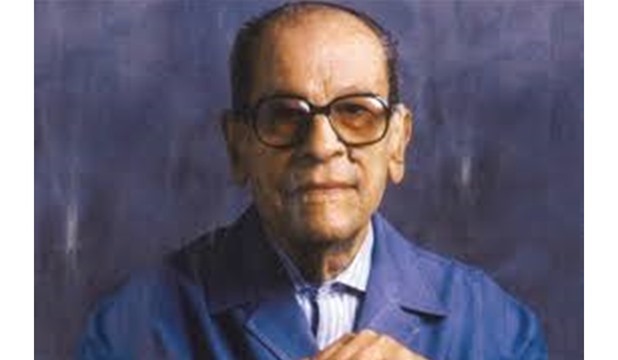 Naguib Mahfouz was born in Gamaliya, Cairo. The family lived in two popular districts of the town, al-Jamaliya and al-Abbasiya, which have provided the backdrop for most of his writings. His father was a civil servant, and Mahfouz eventually followed in his footsteps. In his childhood his mother often took him to museums and Egyptian history later became a major theme is many of his books. He graduated from Cairo University in 1934. By 1936, having spent a year working on an M.A., he decided to become a professional writer. He worked as a journalist at Ar-Risala, and contributed to Al-Hilal and Al-Ahram.

Before turning to the novel, Mahfouz wrote articles and short stories. His first published book was a translation of James Baikie’s work on ancient Egypt. His first collection of stories appeared in 1938. In 1939 he entered government bureaucracy, where he was employed for the next 35 years. From 1939 until 1954 he was a civil servant at the Ministry of Islamic Affairs, and then worked as director of the Foundation for Support of the Cinema, the State Cinema Organization. In 1969-71 he was a consultant for cinema affairs to the Ministry of Culture.

Mahfouz’s major work in the 1950s was The Cairo Trilogy, which the author completed before the July Revolution. The novels were titled with the street names Palace Walk, Palace of Desire, and Sugar Street. Mahfouz set the story in the parts of Cairo where he grew up. They depict the life of the patriarch al-Sayyid Ahmad Abd al-Jawad and his family over three generations in Cairo from WW I to the 1950s, when King Farouk I was overthrown. With its rich variety of characters and psychological understanding the work connected Mahfouz to such authors as Balzac, Dickens, Tolstoy, and Galsworthy. Mahfouz ceased to write for some years after finishing the trilogy. Disappointed in the Nasser régime, which had overthrown the monarchy in 1952, he started publishing again in 1959, now prolifically pouring out novels, short stories, journalism, memoirs, essays, and screenplays.

Mahfouz left his post as the Director of Censorship and was appointed Director of the Foundation for the Support of the Cinema. He was a contributing editor for the leading newspaper Al-Ahram and in 1969 he became a consultant to the Ministry of Culture, retiring in 1972. He has been a board member of Dar al Ma’aref publishing house. Most of his novels have been serialized in Al-Ahram, and his writings also appeared in his weekly column, ’Point of View’.

Mahfouz, called the "Balzac of Egypt", has written some 40 novels and short story collections, screenplays, and several stage plays. In his work Mahfouz has described the development of his country in the 20th-century. He has combined intellectual and cultural influences from East and West - his own exposure to the literarature of non-Arabic culture began in his youth with the enthusiastic consumption of Western detective stories. Mahfouz’s stories are almost always set in the heavily populated urban quarters of Cairo. He had focused on ’the little man’, who has to deal with the modernization of society and the temptations of Western values. In his own country his characters have become household words, and he is widely considered a spokesperson not only for Egypt but also for a number of non-Western cultures. Before the Nobel Prize only a few of Mahfouz’s novels had appeared in the West. Jacqueline Onassis was among those people, who brought early translations to the English-speaking readers. In 1994 Mahfouz was stabbed in the neck with a kitchen knife. Two Egyptian Islamic militants were sentenced to death in 1995 for attempting to kill him. In his old age Mahfouz has become nearly blind.

In 1968 he received the State Recognition Award in Literature.
In 1972, he was awarded the Decoration of Republic of the 1st Order.
In 1988, he received the Collar of the Nile which is the highest order in Egypt.