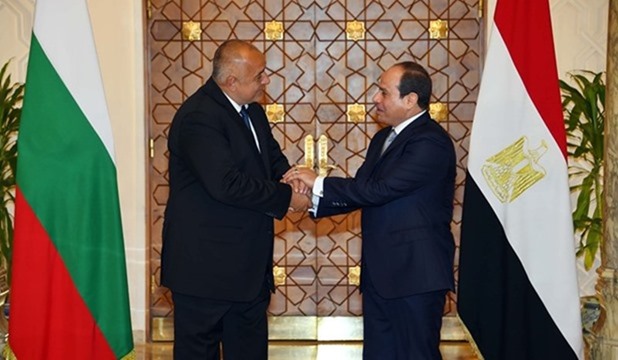 They held talks on a number of issues of mutual concern. The talks covered ways to enhance bilateral relations in various sectors and a number of regional and international issues.

In a joint press conference with Bulgarian Prime Minister, President Sisi announced the establishment of an Egyptian-Bulgarian committee to shore up bilateral cooperation, saying talks with the Bulgarian premier were held in a cordial atmosphere reflecting the closeness and understanding enjoyed by the two countries over their 90-year-old relationship.

The President said the two sides agreed to promote joint relations and cooperation in all fields including education, health and technology transfer, adding they discussed many issues of mutual concern.

He thanked Bulgaria for conveying Egypt's viewpoints to the European Union, saying he discussed with the Bulgarian Prime Minister regional issues including the developments in Libya and Syria as well as the importance of stability in the Middle East and North Africa region.

The talks stressed the importance of finding a solution to the Palestinian problem through the establishment of an independent Palestinian State on the 1967 borders with Al Quds (East Jerusalem) as its capital.

President Sisi said the Egyptian-Bulgarian committee will be established in Sofia early next year and will convene in Cairo in the second half of the same year before convening in rotation in the two countries' capitals once a year.

For his part, the Bulgarian Prime Minister praised Egypt's history and values, as well as its religious tolerance and social harmony, pointing out that he considers President Sisi "the protector of Christian values in Egypt" and underscoring Bulgaria's appreciation for Muslims and people of all faiths.

He said that President Sisi expressed readiness to establish a Bulgarian university in Egypt to transfer Bulgarian sciences and promote cooperation in the fields of education, health, energy and military sciences.

The Bulgarian Premier said the two sides discussed cooperation in the fields of fighting illegal immigration and antiquities' smuggling, expressing belief that Egypt is safe for Bulgarian tourists.

He also said that Egypt will host early next year the conference of the European Union and Arab countries for boosting cooperation between the two sides.