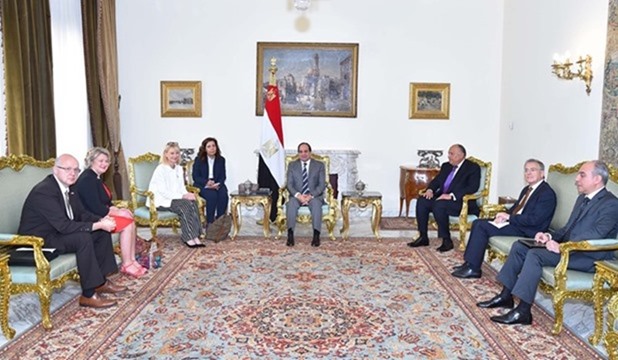 President Abdel Fattah El Sisi met on Saturday 27/10/2018 a Bundestag (German federal parliament) delegation under Chairman of the parliament's Committee on Economic Cooperation and Development Peter Ramsauer. He stressed the importance of Germany's ties with Egypt in light of distinguished relations between both countries.

The meeting was attended by Prime Minister Mostafa Madbouli, the ministers of foreign affairs, trade and industry in addition to the German ambassador in Cairo.

He also shed light on the economic achievements attained since the national economic reform program was launched, the spokesman added.

The meeting also took up means of reforming the educational system in Egypt.

On that score, Ramsauer stressed the parliament's keenness on boosting bilateral cooperation in the fields of education, health and empowerment of youth.

Illegal migration was also among the issues covered during the meeting.

Sisi emphasized that Egypt exerts strenuous efforts to face the problem of illegal migration through tightening security along its borders.