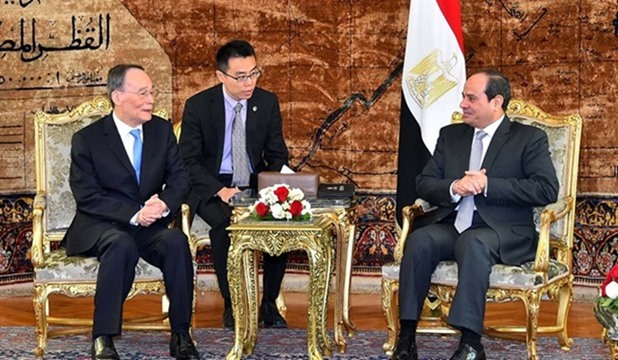 Sisi welcomed the outcome of the recent Forum on China–Africa Cooperation (FOCAC), asserting his confidence that such forums would serve both African and Chinese interests alike.

Egypt would highlight the importance of cooperation between China and Africa during its presidency of the African Union in 2019, Sisi said.

The Egyptian-Chinese strategy heavily relies on enhancing relations in various fields and coordinating stances at the international forums, Sisi added.

For his part, Wang hailed Egyptian civilization, noting that both China and Egypt have great civilizations, which could ensure sustainable development for the peoples of the two countries.

The Chinese vice president also lauded the achievements and stability Egypt achieved after its economic reform program was implemented, along with conducting several national mega projects in a short time.

Such progress prompted the Chinese giants to do businesses in Egypt and take part in such national mega projects.

The talks also touched on issues of common interest, and other regional files, as Wang voiced his country’s support for Egypt in its war against terrorism and its endeavor to reach political settlements of the Mideast crises.