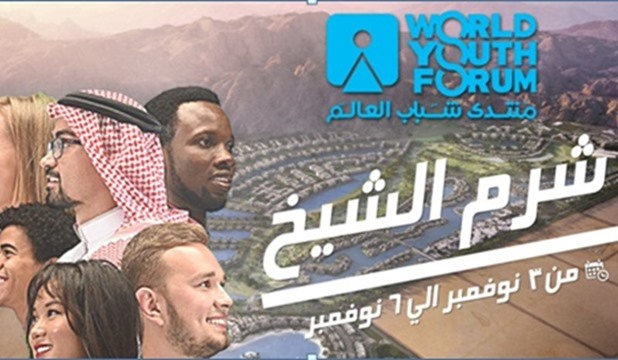 Under the auspices of President Abdel Fattah El Sisi, the second edition of The World Youth Forum will take place from November 3rd to 6th, 2018 in Sharm El-Sheikh, Egypt (The Land of Peace).  The second edition of the Forum is expected to be attended by some 5,000 young people from 145 countries.

World Youth Forum is a platform built by promising youth. It sends a message of peace, prosperity, harmony, and progress to the entire world. It engages youth from around the globe in an enriching set-up, allowing them to exchange views and recommend initiatives to decision-makers and influential figures. The forum is a chance for you to engage with top policymakers, network with promising youth from the region and the world that are determined to make our world a better place for everyone.

The World Youth Forum agenda is divided into three tracks: peace, development and creativity, tackling themes and topics of interest to international youth, creating a platform to express views, present ideas and share experiences throughout its sessions.

Message of the Forum

This year, the Forum events will revolve around a vision inspired by “The Seven Pillars of the Egyptian Identity”, a book by Egyptian Author Dr. Milad Hanna written for the purpose of emphasizing the unity and harmony of the Egyptian society despite divergences and differences.

President Abdel Fattah El Sisi inaugurated a world youth theater, where the participating young people from around the globe give theatrical performances on the world's different cultures.

A session under the theme of "The Digital World as a Parallel Society; How it Controls on our Real World" started within the framework of the World Youth Forum. More

President Abdel Fattah El Sisi attended a session on "The role of world leaders in building and sustaining peace" within the framework of the World Youth Forum hosted by the Red Sea resort city of Sharm El Sheikh. More

President Abdel Fattah El Sisi pledged that the recommendations of the ongoing World Youth Forum will include providing necessary funding for women for work and investment. During the session Agenda 2063: The Africa we want, President Sisi said "we have a special appreciation to women in Egypt and any recommendation or request related to women will be very highly responded to." More

President Abdel Fattah El Sisi defended Egypt’s stance on the crisis of Yemen saying that the conflict in the war-ravaged Arab country is far more complex than being a struggle between the government and the Houthis. Egypt chose not to interfere in the Yemeni crisis because the war in Yemen is a proxy war in which other countries are involved, the president said answering a question in a debate session held as part of the World Youth Forum 2018 hosted by the Red Sea resort city of Sharm El Sheikh. More

President Abdel Fattah El Sisi participated in a bike marathon. Many participants in the forum took part in the marathon.

President Abdel Fattah El Sisi said Ethiopia has witnessed new positive changes as regards its leaderships. During a meeting held with representatives of foreign media in Egypt, the President said an agreement has been reached with African states to support development projects as long as they do not affect the lives of the Egyptians who depend wholly on the River Nile water. More

In his address at the closing session of WYF 2018 in the Red Sea resort of Sharm El Sheikh, he called for realizing world peace, saying: “Peace is one of the names of Allah”, asserting that the World Youth Forum (WYF) offers a great chance for constructive dialogue among peoples of different civilizations. More

Sisi: Egypt does not discriminate between Muslims, Christians... all are Egyptians

Sisi: Any role of militias in conflict-hit countries is unacceptable

Sisi: Egypt did not distance itself from Arab region

Sisi: Nobody could impose solution on Palestinians

Sisi: No one can impose an unwelcome path on Egyptians