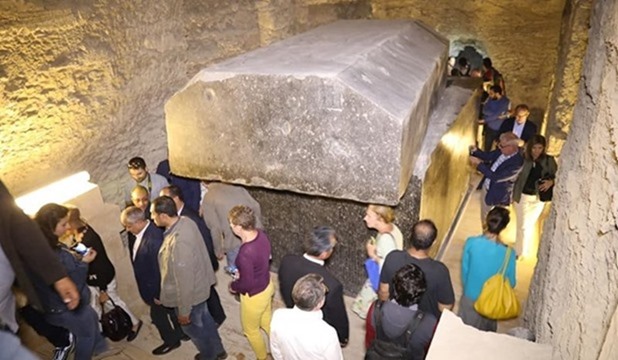 Antiquities Minister Khaled Anani announced that three tombs dating back to the Pharaonic modern-state era of Egypt and four other ancient ones containing a group of artifacts including mummified cats "Bastet", were unearthed at Giza's Saqqara necropolis.

The minister highlighted that this step marks the beginning of a great archaeological discovery in the area, noting that the artifacts will be displayed at Imhotep Museum of Saqqara starting from November 15.

The minister made the remarks in a press conference held at Saqqara area to announce details of the new archaeological discovery, in the presence of more than 30 foreign ambassadors and heads of foreign archaeological missions operating in Egypt.

Anani said that another two archaeological discoveries in two Egyptian governorates will be announced before the end of 2018.

Bastet was a goddess of the ancient Egyptian religion.

For his part, Secretary-General of the Supreme Council of Antiquities Mostafa Waziri said that the Egyptian mission has started working in Saqqara necropolis in April.

Waziri noted that work at Saqqara ancient burial ground which served as the necropolis for the Ancient Egyptian capital, Memphis, took two months, pointing out that more than 200 mummified cats "Bastet" were uncovered along with 200 scarabs which are considered among the rarest mummies.

A tomb of a crocodile mummy was also found for the first time at Saqqara, he said.

He added that visitors will be able to view the discoveries at Imhotep Museum for free.