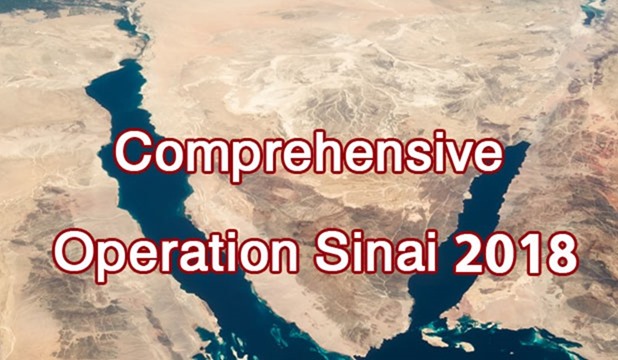 In a released statement, the command explained that the terrorists were killed in an exchange of fire with the Armed Forces.

Arms and ammunition along with telecommunication sets were found with them, it pointed out.

The comprehensive operation accomplished over the past few days several achievements within the framework of efforts for ending terrorism and drying out its sources at all levels, added the statement.

The General Command of the Egyptian Armed Forces added in its statement that the air force destroyed 62 4X4 vehicles at the southern and western borders of Sinai along with an arms cache and a hiding place for terrorists.

The 27 terrorists, who were killed earlier in the day, were located in the area of the second and third field armies, added the statement.

Up to 342 hiding places for terrorists were uncovered and destroyed along with explosive materials and auto spare parts and motorcycles over the past few days, according to the statement.

Up to 27 vehicles used by terrorists were also destroyed along with 83 motorcycles during combing operations in the past few days, added the statement.

One soldier has been martyred as a result of the brave combat operations for uprooting terrorism, according to the statement.

The Armed Forces and police confirm their determination to continue all efforts for protecting the great Egyptian people, the statement concluded.