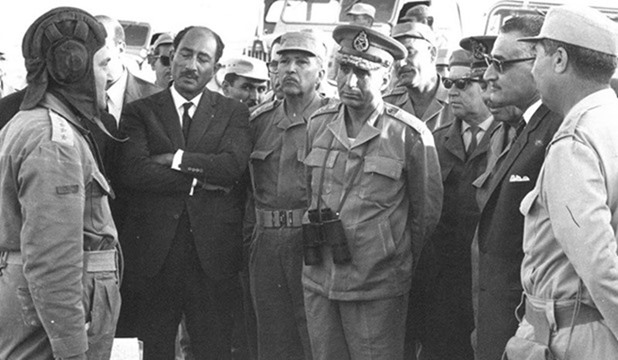 Abdul Munim Riad was born 22 October 1919 in the Nile Delta city of Tanta to father Mohammed Riad, a lieutenant colonel in the Egyptian military and an instructor at Royal Military Academy.

- Graduated from the Military College in 1938 as second lieutenant

- Received his Master's Degree in Military Sciences in 1944

- Joined the Faculty of Science to study calculus

- Joined, as a Lieutenant-General, the Faculty of Commerce

- In 1960, he was appointed Chief of Staff of Artillery

- In 1961, he became the vice president of operations division under the chairmanship of staff of war and the adviser air force command for air defense

- In 1964, he became the chief of Staff of the consolidated Arab leadership

- In 1966, he was promoted to a lieutenant general

- In May 1967, After King Hussein traveled to Cairo to sign the Joint Defense Group, Riad was appointed commander of the advanced command center in Amman

- In 1967, when the War broke out, he was appointed Commander of the Front in Jordan

- On 11 June 1967, he was selected as Chief of Staff of the Armed Forces and began with the Egyptian Minister of War and Commander of the armed forces, Mohamed Fawzi, to rebuild and organize the army

- In 1968, he was appointed Assistant Secretary-General of the League of Arab States

- Riad achieved military victories in the battles fought by the Egyptian armed forces during the War of Attrition, such as head battle that prevented the Israeli forces from controlling the city of Port Fuad Egyptian located on the Suez Canal where a small force of infantry was able to defend the city, and the destruction of the Israeli destroyer Eilat in the 21 October 1967. Also dropping some Israeli warplanes in 1967 and 1968.

- National Order of the Cedar, Lebanon

- Order of the Star of Jordan

On 9 March 1969, Riad decided to go himself to the front to see closely the results of the battle and decided to visit the most advanced sites that were not far from Israeli fire, only 250 meters.
This site witnessed the last minutes in the life of Gen. Riad, with hundreds of enemy fires suddenly on the area where he was standing in the midst of his troops and the battle, which was led by General Riad himself, continued about an hour and a half hour till one artillery shot exploded fire near the crater he was leading the battle from. As a result of the fragments and the deadly vacuum Riad died of his wounds after 32 years spent working in the army.