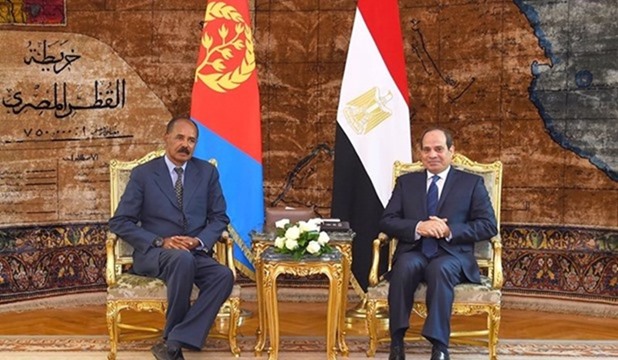 The national Egyptian and Eritrean anthems were played during the reception ceremony, which included also inspecting the guard of honor.

During the meeting, Sisi lauded the robust historical ties between both sisterly African nations.

He also asserted Egypt's keenness to keep up the current momentum for stronger mutual ties, establish sustainable partnership and maintain mutual coordination on regional as well as African issues, especially under Egypt's current presidency of the African Union (AU).

For his part, Afwerki praised Egypt's vital role to drive the development process and maintain peace and security in Africa, highlighting his country's commitment to further cooperation in several sectors.

He further applauded Egypt's constructive efforts to ensure stability in the Horn of Africa.

The meeting took up the latest regional developments as both leaders agreed to maintain intensified coordination on such developments, especially those related to the Horn of Africa, the situation in Sudan and Somalia, Red Sea security and the Nile water.