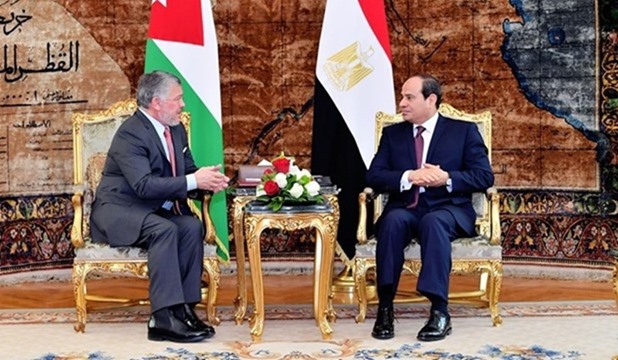 The two leaders are set to confer on bilateral relations and means of boosting joint cooperation, as well as regional developments.

They asserted that efforts must be intensified to restart the long-stymied peace talks in line with the international resolutions and the Arab peace initiative and on the basis of the two-state solution, with the establishment of a Palestinian state on the June 4, 1967 borders with East Jerusalem as its capital.

Meeting King Abdullah II of Jordan, the President said both Cairo and Amman are keen on promoting joint Arab action, which will contribute to addressing the multiple challenges facing the Arab nation at the current stage.

A session of bilateral talks gathered the two leaders, then the two countries' delegations joined an expanded meeting, Presidential Spokesman Bassam Rady said in a statement following the meeting.

The Jordanian monarch hailed the deeply rooted relations binding Amman and Cairo, expressing the hope cooperation frameworks would be further upgraded during the coming period.