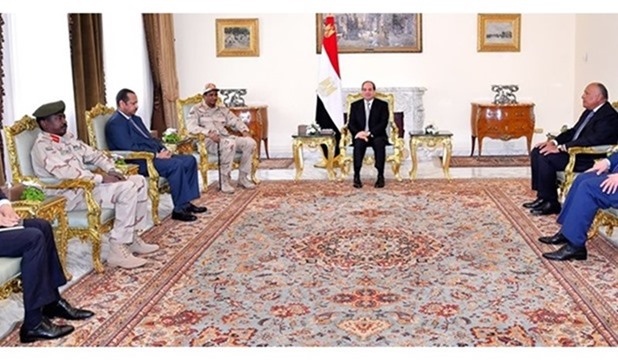 The President made the remarks during a meeting with Deputy Head of Sudan's TMC General Mohamed Hamdan Dagalo.

President Sisi stressed Egypt's firm and supportive stance to Sudan's stability and security and its people.

During a meeting with Deputy Head of Sudan's TMC General Mohamed Hamdan Dagalo, Sisi said Egypt is keen on continuing cooperation and coordination with Sudan in all issues of common interest and finalizing the implementation of joint development projects like electricity linkage with Sudan and the railway linkage project.

Sisi pointed to his close follow-up of the Sudanese developments, asserting Cairo's support to the Sudanese people's choices and will in developing their country's future along with maintaining the state's institutions.

The President also voiced Egypt's readiness for offering all kind of support to Sudan to overcome this stage away from any external interference.

He expressed his trust in the Sudanese institutions and people in restoring stability and security, affirming the importance of unifying the regional and international efforts to help Khartoum overcome its economic crisis.

Dagalo, for his part, hailed historical and deeply-rooted ties with Egypt as well as its unlimited support to maintaining Sudan's stability and security.

He briefed Sisi on the latest developments in Sudan including signing a political agreement between TMC and the opposition to pass through the transitional period.

The two sides agreed on maintaining consultation and coordination to reach a clear and long-term vision to achieve sustainable peace and stability for the Sudanese people.