The 46th anniversary of the October victory 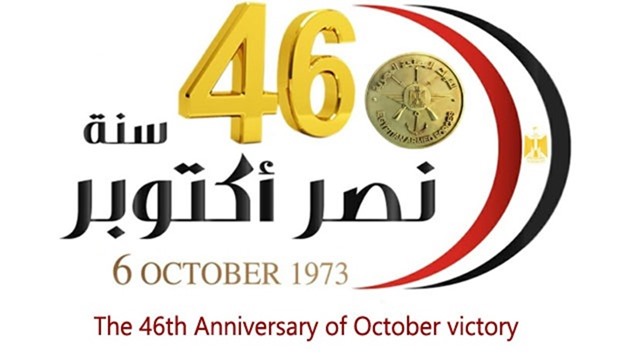 
The glorious victory of October was not only a restoration of land, but also a revival of a spirit that was thought of as diminished and blurred. It is the "spirit of patriotism and loyalty" that was pivotal in this great victory.


After the defeat of June 1967, when those who lost their loyalty came out to violate the reputation of the great army of Egypt and accuse it of corruption, lack of resourcefulness, and letdowns in defending the homeland, the victory of October came to prove that the army of Egypt is the best of all; they are the loyal sons of Egypt who were able to erase defeat and turn it into a glorious victory.


There had been claims that the Egyptian people lost their loyalty after the defeat of 1967 and forgot that this people has a civilization of seven thousand years deeply rooted in history. They imagined that this people would not bear the then-difficult reform measures to be able to provide weapons and supplies for the army, but the people impressed everyone with cohesion and tolerance, perseverance and patience and equanimity to face all economic difficulties until they achieved the victory of October.

At that time, those who reign over ashes, tried to spoil the Egyptian-Arab relations in order to keep Egypt alone without support, but the Egyptian-Arab cohesion was evident in the victory of October, and Arab unity and the role of Saudi Arabia, UAE and the Gulf emerged in the most beautiful way , supporting  Egypt to achieve victory..

Event monitoring of the Egyptian political, economic and social scene today, comparing happenings before and after the victory of October 1973,  will find out  they are almost similar, so history repeats itself and a new epic is being witnessed with the spirit of the glorious October and the  pillars  of cohesive people and the homeland  armour and a sword of the Egyptian Army, and features of economic reform and development, under the auspices of  the president or the symbol  of the country as it makes tremendous leaps forward, with  an eye on the simple, low-income and poor brackets.

Following the 1967 war, there has been a political, economic and military status that threatens the Egyptian State, however with top secrecy, commitment, persistence and collaboration with the political leaderships, the military institution had committed itself over seven years to reconstruct its infrastructure, train its personnel and draw up a comprehensive strategic military plan. The spirit was so high that the military personnel only were paid half of their salary to support the war effort, as the Egyptian citizens have given up their basic needs to help soldiers return Egypt’s dignity, and due to this spirit, we have achieved the glorious October victory.

After June 30 revolution in 2013 and due to people cohesion, the October spirit has returned to face the political vacuum, chaos, spread of terrorism, as well as attempts to change the identity of the Egyptian state and replace the long-standing identity with the “stateless” notion. The spirit has succeeded to restore confidence of the society, after a long period of polarization, intimidation, stress and sedition among the nation, which was previously prominent in the October war.

Under the Western and American economic siege, Egypt succeeded in managing the war economy achieving a victory for the Egyptian will in face of attempts to kneel and break it, where Egyptians ability to burden the difficulties was discovered. The fighters in the October War were not only soldiers, but the people as well.

The spirit of October War succeeded in facing the economic crisis and adoption of the economic open-door policy supported by the popular solidarity, as some workers donated their incomes to support the war effort.

With the same spirit of October War, what is happening currently in Egypt, after June 30 Revolution, like economic transformations and adopting the economic reform program that combats poverty, ignorance and disease, within a few years, Egypt was able to get out of structural economic crises that had negative effects on the standard of living.

One has to refer to examples that reflect the deep-rooted spirit of October War in the Egyptian people currently, for example, the great contribution of Egyptians to the "Long live Egypt" Fund, through which the Egyptian Presidency solves many economic and social problems. Also, Egyptians’ confidence in their leadership after calling for investment in the new Suez Canal project, where we found a high turnout of citizens to put their savings in this project.

"The Arab world without Egypt is like NATO without the USA"… a statement made by former Jordanian Crown Prince "Hassan bin Talal" in November 1987. Regardless the Prince's praising of the Egyptian role in this argument, Egypt enjoys regional weight that extends throughout its long history, based on its geopolitical and strategic importance and ability to orchestrate the region's events due to its geographic location, demographic weight, military capability, and the historic and contemporary role as the heart of cultural and intellectual creativity in the Arab world.

Accordingly, the Sixth of October War in the Arab memory represents an experience of national success. Since the beginning of the preparation of that war, Egypt has summoned the requirements of Arab national security and strategic coordination between Egypt and Syria militarily, Saudi Arabia economically, Algeria weaponry and Morocco politically.

The Arab countries realized that the June 30 Revolution is a rescue and protection for Arab national security and that Egypt's escape from collapse and division is a real rescue for the area and the whole region. The agenda of the Muslim Brotherhood was to extend governance from Egypt to other neighboring countries and was working very hard to do so. But the Egyptian will was stronger, so the Arab brothers, mainly the United Arab Emirates and Saudi Arabia, sided with the Egyptian people in the June 30th Revolution and provided political and economic support to their elder sister Egypt.

To conclude, we cannot fail to mention that we will continue to invite the spirit of the great October victory, that the transit will continue, and that we will remain able to challenge forever under a conscious leadership that has been faithful to its people who owed gratitude its dedication.