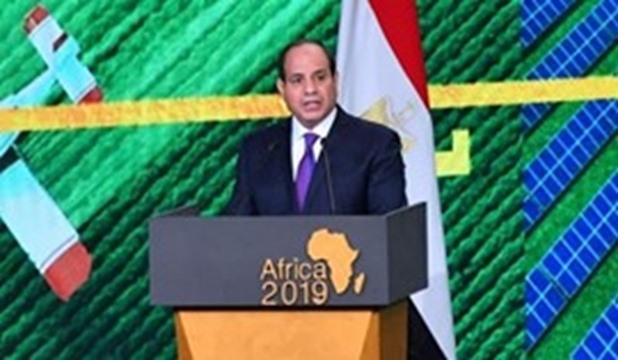 President Abdel Fattah El Sisi on Friday witnessed the inauguration of the Investment for Africa Forum 2019.

The event is organized by the Ministry of Investment and International Cooperation, in cooperation with the ministries of foreign affairs and trade.

A large number of African heads of state and government, along with high-profile business figures from around the world are taking part in the forum, with a view to stimulating investment in Africa.

The Africa Investment Forum activities were kicked off by performing a song by several Egyptian and African singers and musicians, to express unity among Africans.

Following the musical performance, Minister of Investment and International Cooperation Sahar Nasr delivered a speech, in which she highlighted that the presence of President Abdel Fattah El Sisi, in his capacity as the chairman of the African Union, in the forum delivered a strong message that this economic grouping is the most important in the African continent.

Nasr stressed the necessity of continuing economic cooperation among African states in the trade, investment and development fields, underlining that President Sisi gave directives to exert utmost efforts to step up cooperation between Egypt and the African countries.

The current year will witness the implementation of more than 154 projects in the infrastructure, transport, renewable energy, agricultural and investment fields, Nasr stressed.

On the sidelines of the forum, several cooperation agreements between the governments, private sector and funding institutions will be signed to pump more investments into the continent, she added.

Defying the current slowdown in global foreign direct investment, FDIs flowed into Africa, an 11 percent increase compared to the previous year, the minister pointed out.

Nasr noted that achieving development requires moving to digital transformation to cope up with the technological lea pin the region.

The minister affirmed the necessity of expanding the establishment of industrial and economic zones to lure more investments to the continent.

Afterwards, a documentary on the enormous natural riches and investment opportunities enjoyed by Africa shed light on Egypt's role under President Abdel Fattah El Sisi in supporting the African continent.

On his part, James Zhan, Director of Investment and Enterprise at the United Nations Conference on Trade and Development (UNCTAD) said that Africa is witnessing a surge in foreign direct investments, which reached 11%.

Delivering a speech at the Investment for Africa Forum 2019, Zhan added that several world countries are interested in strengthening their investments in Africa, compared to others parts of the world.

The UNCTAD official lauded the rapid improvement in transport and communications infrastructure in Africa, which greatly contributed to luring further investments.

Meanwhile, Chris Antonopoulos, the CEO of Lekela Power, praised Egypt for its efforts to make best use of new and renewable energy sources, pointing out that Africa has promising opportunities in this sector.

Antonopoulos added that Africa is witnessing a radical shift in the field of digitization.

Cisco Africa Public Policy Director Charmaine Houvet stressed the importance of education for the global firm, calling on governments to give opportunities for enterprises to implement action plans related to the digitization.

Houvet pointed out that her company turned many classes in Kenya to digital ones, noting Cisco is about to take bold decisions in this regard, such as replacing school books with tablets.

In the meantime, Omar Saqr, the executive director of Nawah Scientific, said that Nawah is the first Egyptian private scientific research center to provide all its services online.

An ambitious plan is being drawn up to establish an integrated chain with all African research centers, he added.

Chairman of the Board of Directors of the African Export-Import Bank (Afreximbank) Benedict Oramah hailed the development achieved in the New Administrative Capital as a new African city.

Oramah noted that Afreximbank invests $5 billion annually in Africa, adding that the bank offered nearly $100 billion to 500 banks in the continent over the past years.