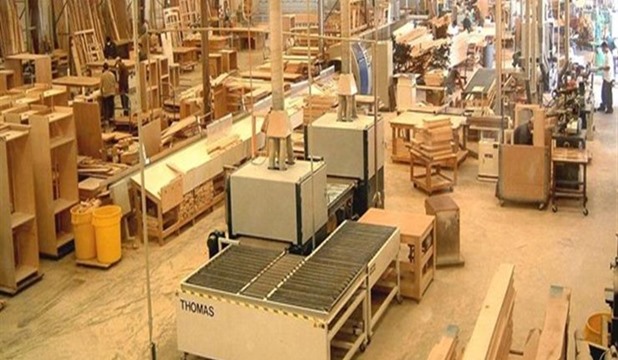 President Abdul Fattah El-Sisi inaugurated Damietta Furniture City on December 3, 2019. It is considered one of the mega national projects and a springboard for small and medium-sized enterprises and a gate for Damietta’s furniture to get access to the world. Damietta is considered the first and biggest industrial zone specialized in fabricating furniture and supplementary industries in the Middle East as well as one of the promising industrial sectors in Egypt. The Egyptian furniture product, especially the high-quality handmade of Damietta, enjoys a good reputation worldwide, leading to opening new markets for its exportation on domestic, regional and international levels. Damietta is deemed the kiss of life for furniture industry to transform it from a craft into an industry that depends on modern technology. Egypt was distinguished by furniture industry thousands of years ago as the ancient Egyptians worked in agriculture especially tree plantation which helped them to obtain the needed wood for fabricating furniture. Thus, they became professional in this industry, and this was depicted on temples’ walls. The Egyptians inherited this craft and succeeded in exporting wood products and establishing furniture exhibitions abroad especially in the European Union countries.

Damietta is unique with its distinguished geographical location and all investment fundamentals.  It lies northern the Delta, 15 Km far from the river’s downstream in the Mediterranean. It is bisected by the River Nile (Damietta Branch) and it is bounded by the Mediterranean to the north and Lake Manzala to the east and the Delta fields and plains to the south and the west.

-                     Damietta enjoys an infrastructure that enables it to absorb great and new investment projects where there are stations and networks for electricity, water, sanitary drainage and a modern road network. In addition, means of transportation diversify between land (vehicles and railways) and maritime represented in Damietta’s seaport and river port, besides being close to Cairo, Alexandria and Port Said airports.

-                     The industrial activity in Damietta is considered one of the best economic models ever, it depends on the human resource and is based on small producing units, most of which are run by the private sector.

-                     70% of the workforce in the governorate works in furniture industry. Moreover, there are other industries like textiles, food industries, fish canneries, oil and soap and building materials, among others.

-                     Establishing an integral furniture city as this industry is considered one of the fastest-growing sectors in Egypt where the export values reached L.E 14 billion at 51.6% increase during the last 5 years to reach L.E 2.3 billion annually. The furniture sector in Egypt enjoys a strong reputation in Europe and the Middle East.

-                     Providing the industrial infrastructure needed to encourage the business sector and investors to implement industrial projects and to reduce project-construction costs.

-                      Create export opportunities especially in the presence of the location advantages being near to export ports (Damietta and Port Said) and the main consumer markets to reach an export income of $ one billion annually which allows it to compete regionally and internationally.

-                     Establishing an integral industrial city that serves the domestic market, reaching up to the international market and increases exportation.

-                     Establishing permanent exhibitions for furniture to serve the domestic market and to open wide horizons before furniture exports, in addition to diversification of the economic structure to coordinate in enhancing living conditions.

-                     Forming a new economic entity due to the turnout of small investors whose capital is appropriate to the available areas and the activities’ nature.

Specifications of the Furniture City Project

-The project is established on an area of 331 feddans out of which 58 feddans are allocated for establishing 1348 small and medium workshops.

-Establishing wood stores zone that includes 50 stores and a fundamental services zone on 30% of the total area.

-Five feddans are allocated for the complementary industries and 15 feddans for the petrochemicals and environmental-friendly paints with a total of 17 factories.

-40 feddans are allocated for infrastructure projects.

-Establishing the biggest marketing exhibitions in the Middle East on an area of 110,000 square meters, where it consists of three floors, dubbed “Egypt Furniture Mall” along the two facades of the city.

-Establishing a hospital for limb surgery for treating the occupational hazards.

-Establishing an administrative center including the governmental services center that comprises branches of all relevant ministries (Investment – Trade and Industry- Industry Modernization Center- Ministry of Finance- Chamber of Commerce- Export Center) to provide their services directly.

(DFC) has contracted with an Egyptian company to design an electronic site to sell the city’s products on line and ship them to all the world. The work in this electronic site was scheduled to take place at the middle of 2020. The company hired professional photographers to take special photos of the factories and workshops’ products to be posted on the site, as the company aims to develop these products in terms of the good quality and price and modernize the designs in order to be able to compete globally. The company also negotiates with Italian governmental authorities and private sector to establish a school to design furniture in (DFC) on an area of 5000 m2 with an investment ranging from LE 250 to LE 300 million. The company contracted with a local one to implement a trademark for the (DFC) to be announced late this year. We hope this trademark will represent the city’s products to be known all over the world. The company hired an Italian company to establish hotel apartments on an area of 3000m2 with an investment of LE 300 million. Furthermore, the company will prepare permanent shops for the city’s products in several governorates on top of which are Cairo, Alexandria, Delta region, South Sinai and Red Sea. Egypt ranked fourth globally in furniture industry, whereas China ranked first as it dominates over 60% of the production followed by Italy and France. Damietta governorate’s production represents nearly two thirds of the Egyptian one. The Egyptian furniture is highly demanded as happened in the international exhibitions as what happened in “Furnex” international exhibition in its ninth session. This exhibition was organized by the Egyptian Furniture Export Council (EFEC) in cooperation with “Expolink”, the Egyptian Exporters Association and the Chamber of Wood Working and Furniture Industry “CWWFI” in Cairo International Conference Center, where Damietta investors gain the largest share of the local supply and export contracts in many foreign countries like Canada, The U.S.A and some African and European countries. The Egyptian Exporters Association announced that the Egyptian companies won deals and export contracts, whose value exceeds $ 35 million in addition to the current negotiations to sign other contracts valued at $ 150 million.