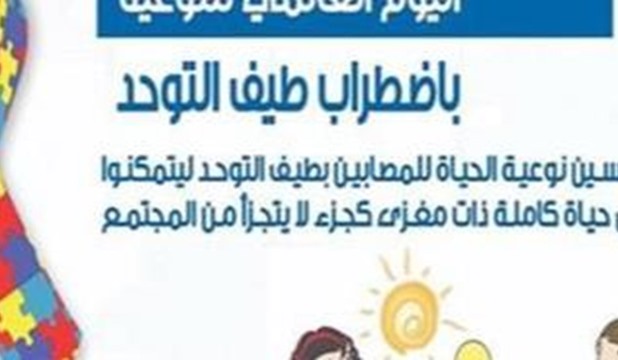 ​On April 2, the world celebrates World Autism Awareness Day every year. This year (2019) it is celebrated under the theme 'Assistive Technologies and Active Participation', this is the 12th celebration, which aim to focus on the use of assistive technologies for people with autism, by describing these techniques as tools in removing barriers to their full social, economic and political participation in society, and in promoting equality, and inclusion.​

In December 2007, the UN General Assembly unanimously adopted resolution no 139/62, marking 2nd of April as World Autism Awareness Day, to highlight the need to help improve the quality of life of autistic people so that they can live a full and meaningful life as part of society.

The first ceremony took place in 2008.​​The Convention on the Rights of Persons with Disabilities recognizes the effective role of assistive technologies in enabling persons with disabilities to exercise their rights and freedoms.

It obliges States parties to the Convention to promote the availability and use of these technologies at reasonable costs, to facilitate access to it, and to undertake research or development in these new technologies.​

While technological progress continues, significant obstacles remain to the use of assistive technologies, including high costs, lack of technologies, awareness of their potential, and lack of training in their use.

Available data indicate that in many developing countries, more than 50% of people in need of assistive devices cannot access them.​In September 2018, the UN General Secretary launched a new strategy for new technologies, which aims to determine how the United Nations system will support the use of these technologies to accelerate achieving 2030 Agenda for Sustainable Development.

​​The strategy also aims to facilitate the accommodation of these technologies with the values​​recognized in the UN Charter, the Universal Declaration of Human Rights, and international law standards, including the Convention on the Rights of Persons with Disabilities and other human rights conventions.​These values ​​include equality, equity, inclusion and transparency.

The design and use of new technologies, in accordance with the strategy, should be guided by a rights and ethical perspective.​​According to the World Health Organization's statistics for 2017, autism affects millions around the world, estimated at about 70 million, according to statistics of the organization "Autism Speaks", which organizes a global awareness campaign every year.​In Egypt, one in every 80 children suffers from autism.

Autism patients in Egypt suffer from the lack of specialized governmental medical centers and the high cost of treatment in the private sector, with declining governmental support for the disease, which is increasingly spreading in recent years in Egypt and a number of other Arab countries.