Dandara Festival for Music and Singing 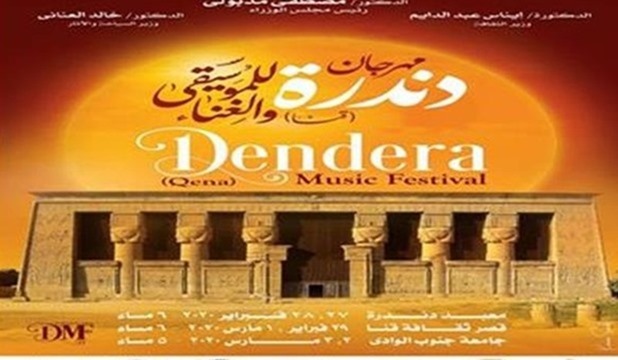 The first edition of the Dandara Festival for Music and Singing, the very first music festival in the Upper Egyptian governorate of Qena, is set to start on Friday the 28th of February and will continue until Wednesday the 4th of March.

The festival is the result of a collaboration between different national institutions starting from the Ministry of Culture to the Ministry of Tourism and Antiquities, and Qena Governorate. It is part of Egypt’s plan to achieve inclusion and cultural justice all over the country, especially in the more isolated and neglected governorates.

The dates of the festival have been changed, with the new dates reflected in the event’s calendar but not in its posters.

Over the festival’s six days, three different sites will host events: Dandara Temple, Qena Culture Palace and the University of South Valley. The launch of the festival will be held in front of the newly renovated Dandara temple, with a stage built it in front of it especially for the event.

Famed Egyptian singer Medhat Saleh and prominent band Black Theama are set to perform at the opening ceremony of Dandara Festival on Feb. 27. The opening ceremony will begin with the artistic shows of the Luxor and Qena Folkloric Divisions of the General Authority for Cultural Palaces in the outer square of Dandara Temple. Afterwards, on the stage that was specially constructed in front of the temple, the governor of Qena, and the minister of culture will deliver their speeches to announce the launch of the festival. Medhat Saleh, accompanied by pianist Amr Selim and his band, will present a selection of his famous songs, preceded by the Black Theama Band, who will present a variety of their songs that express youth issues and dreams. It is noteworthy that the activities of the first Dandara Music and Singing Festival in Qena Governorate will be broadcast live on the Egyptian TV channels. The festival will be held at Dandara Temple on Feb. 27, 28 at 6 p.m., at Qena Culture Palace on Feb. 29 and March 1 at 5 p.m. and at South Valley University on March 2 – 3 at 5 p.m.

Moreover, the festival will host a book fair. The book fair will include hundreds of titles and masterpiece of Arab culture at affordable prices.

The Dandara Festival for Music and Singing in Qena, will host a book fair to go along its own activities.

Minister of Culture Inas Abdel-Dayem said that that in picking El-Abnoudi, the ministry aims to shed light on the symbols and pioneers of creativity for the younger generations.

The book fair accompanying the Dandara Festival for Music and Singing is organised by the Egyptian General Book Organisation in cooperation with the General Organisation of Culture Palaces, and it will include hundreds of titles and masterpiece of Arab culture at affordable prices.