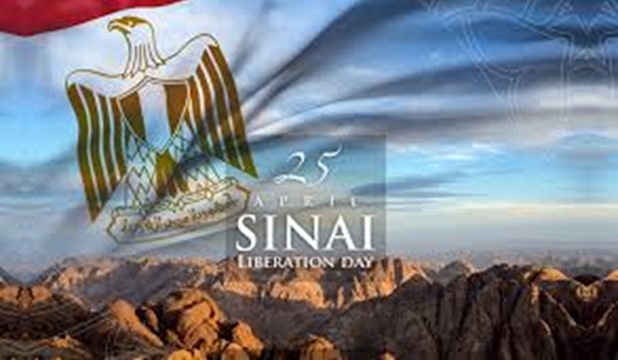 Egyptians celebrate on April 25, the 38th anniversary of the Liberation of Sinai on April 25, 1982. It is the day the Egyptian flag has been raised on the land of Sinai after the complete liberation. It is a wonderful national epic that reflects the heroism of liberating Sinai, by war at one time, and by negotiations at other times. It is also a source of pride for the Egyptian nation, and a milestone in the Egyptian history from which generations learn .

Sinai is the crossing of the prophets and in its holy valley, Allah-Almighty- talked to the Prophet Moses. Its land was honored to receive the holy family in search of safety. Allah-Almighty- swears by the Mount of Sinai, He says in the Holy Qur'an: "By the fig and the olives and by the Mount Sinai". The name "Sinai" has been mentioned in the Holy Qur'an to be mentioned and recited until the end of time.

The anniversary of the liberation of Sinai reflects meanings and lessons for future generations, some of which are tackled in the following lines:

Historically, there were many attempts to attack Egypt through its eastern gate Sinai; these attempts failed and the aggressors were defeated.

In July 1967, Sinai, the land of Turquoise, the strategic part of The Egyptian territory, the link between Asia and Africa, was occupied.

This setback caused a terrible pain on the Egyptian people, which increased their determination and persistence to regain the land. Thus, they began the war of attrition, which witnessed valiant military and intelligence operations that exhausted the enemy's forces and paved the way for the great Victory of October.

The march of restoring Sinai, by war and then by negotiations, represents a remarkable national epic and a source of pride for the Egyptian nation, which set an example of retaining national dignity, national belonging, and adherence to the preservation of national territory.

This national epic will remain an illuminating example for the coming generations to understand the meanings of loyalty and the preservation of national territory. In addition to that, it reflects the national unity as the bloods of Muslims and Christians were shed to liberate each and every inch of Sinai.

The battle for the liberation of Sinai and then the restoration of Taba proved the integration of the capabilities of the Egyptian military, diplomatic and legal forces. To maintain territories, there must be a power to protecting them; the power needs to be directed by a rational mind capable of identifying and employing the tools of the state to preserve its national security and restore its stolen rights completely without losing a single grain of sand.

Egypt, sincere in war as well as in peace, adopted the option of peace, but the peace of the victors. Egypt has chosen peace following Allah's saying in al-Anfal sura: "But if the enemy incline towards peace, do thou (also) incline towards peace, and trust in Allah: for he is One that hearth and knoweth (all things)". Egypt affirmed its commitment to peace, a peace based on power, a peace that has a strong shield to protect it, i.e. the great army of Egypt.

Lesson 3: The Liberation of Sinai and Reconstruction Insurance

Sinai represents 6% of the area of Egypt. It is inhabited by only a small population that amounts to about half a million people. The Egyptian leadership honors those who have lost their lives in order to liberate this strategic part of the homeland, and works to prove that what they have done has not been in vain, but will remain in the blessed land of Sinai in the form of civilization, growth, and urbanization.

Some events are recorded firmly in minds because they have provided examples. The events of Sinai liberation expanded from 1976 to 1982. In that war, brave soldiers and military leaders participated. In the negotiations, politicians, lawmen, economists, and diplomats participated. They have been role models for the Egyptian youth to learn sacrifice and determination to liberate the land and to restore it by all means.

Sinai currently, during the reign of President Abdel Fattah El Sisi, witnesses an unprecedented broad development. It aims to improve the living conditions of citizens in   North Sinai and South Sinai governorates by exploiting all available resources to promote  Sinai to the ranks of investment- attraction areas, which would in turn play an important role in the elimination of intellectual terrorism as an inevitable result of construction and reconstruction.  All state bodies, on top of which the Armed Forces, take part in the development processes. This development has important results, namely:

• Developing water resources as water is the lifeblood of advancement and infrastructure development.

• Paying due attention to comprehensive agricultural reclamation of Sinai and fish farming in Sinai.

• Paying due attention to social housing in Sinai and education projects.

• Empowering Sinai women and raising cultural awareness of the value of the Beloved Sinai.

• Enhancing comprehensive tourism development of Sinai, the most attractive regions of the world.

Let us, the people of Egypt and the future generations, know those lessons well and make them our beacon that enlighten the way for us. Let's make this anniversary a permanent starting point towards building, construction, and maintaining every grain of sand in our lands. Let's keep in mind that this victory would not have been achieved except by shedding the blood of martyrs, providing the sacrifices of grandparents and fathers, and continuing the struggle of the nation. Let's make president Abdel Fattah El-Sisi's strategy for the reconstruction of Sinai a frame for our hopes and aspirations towards a bright future for us and for future generations.