Presidential activity during May 2020 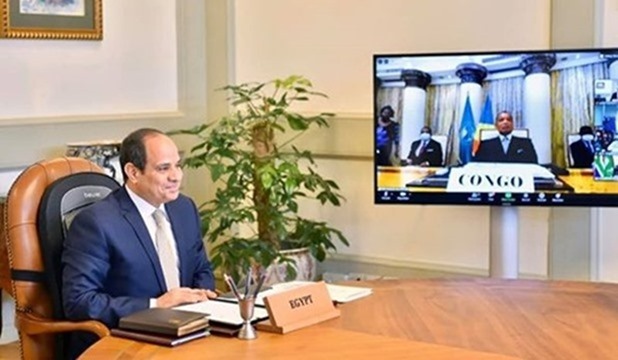 Meetings of the President of the Republic with government officials


- President Abdel Fattah El-Sisi met on 3 May 2020 with, the Prime Minister, Dr. Mostafa Madbouly in the presence of, Advisor to the President of the Republic for Urban Planning, Major General Amir Sayed Ahmed and the meeting discussed the implementation of a number of major national projects at the level of the Republic in the light of the implications of the Corona virus, as well as developments of  the government's plan to transfer ministries and various state agencies and institutions to the new administrative capital.
- During his May 6, 2020 meeting with the Prime Minister and a number of senior officials, President Sisi directed the continuation of comprehensive development efforts in the Sinai Peninsula, especially through attention to Bedouin residential communities which will contribute to the reorganization of housing in the region within the framework of the urban planning carefully thought-out and carried out by The state.  The meeting discussed a review of the executive position of North Sinai Governorate development projects.
- During his meeting on May 7, 2020, President Sisi met with Minister of Youth and Sports Dr. Ashraf Sobhi, in the presence of Adviser to the President of the Republic for Urban Planning, Major General Amir Sayed Ahmed, and Chairman of the Board of Directors of the National Road Company, Major General Magdy Anwar, on the executive steps regarding the development of the sports city in Salam Misr,  East Port Said. The President directed during the meeting to prepare an integrated vision for the development of infrastructure facilities for the sports system in Egypt, in line with the state's strategy to build the Egyptian person.


The President instructed to closely monitor and study the situation regularly regarding the economic implications of the Corona virus, with the aim of working to safeguard the gains made as a result of economic reform.

During his meeting with with the Prime Minister and  Assistant to the President for national and strategic projects and the Ministers of Water Resources, Irrigation and Agriculture on May 12, 2020, President Sisi directed to support the system of dairy collection centers at the level of the Republic and raise their efficiency in favor of increasing the productivity and quality of this important food product. The meeting reviewed the latest developments in a number of livestock, poultry and fish production projects.

President Sisi met on 14 May 2020, with the Prime Minister and the Minister of Electricity and Renewable Energy, and the meeting dealt with the follow-up of strategic projects of the Ministry of Electricity, aimed at strengthening the electricity system in Egypt and modernizing its infrastructure. The President directed during the meeting to give priority to the electricity system in the Sinai and South Valley regions, in light of the utmost importance of the electricity sector for the implementation of projects aimed at meeting the development needs of those areas.

During his meeting on May 16, 2020 with the Prime Minister and the Minister of Transport, General Engineer Kamel el Wazeer, President Sisi directed the speedy completion of the rail network development plan and the establishment of new lines to connect the various parts of the Republic, especially linking the ports to the existing railway network after its development. As well,  the President directed the development of the areas surrounding the roads and axes underway at the level of the Republic.

President El-Sisi met on 5/18/2020 with the Prime Minister and the Minister of Higher Education and Scientific Research, and the meeting dealt with a number of axes of developing the higher education sector and scientific research, especially the information structure in Egyptian universities related to the application of the electronic testing system. The president directed to support the mechanisms of distance learning In universities by taking advantage of the opportunities offered by technology to facilitate the educational process for students. The President also directed the support of clinical experimnts in relation to the emerging corona virus.

President Sisi met 5/20/2020 with the Prime Minister, and the meeting discussed a review of the latest developments regarding the state's efforts to combat the spread of the new Corona virus, and the precautionary measures that are applied in this regard during the period of the Eid al-Fitr holiday. The President directed the continuous update of treatment protocols from Corona virus with all the relevant  and concerned health facilities nationwide according to the latest developments on the international level.

President Sisi made an inspection tour of some national projects in Cairo on Saturday, May 9, 2020. The tour included the axis of civilizations in the comprehensive development project of the historic Ain Sira Lake area and the Museum of Civilization in Ancient Egypt. The president also inspected the bridges network that was established to connect this area with the main axes and roads of the capital to facilitate traffic, as well as projects to develop the eastern Cairo axes in Nasr City, Heliopolis and Al Rehab.

On Thursday 21/5/2020, President Sisi witnessed the inauguration of the third stage of the Bashayer Al Khair Project in Alexandria Governorate. During the opening, a documentary film entitled “Bashayer Al Khair 3” was displayed. The film reviewed what has been achieved during the past years of converting slums into housing Civilization.

On 27/5/2020, President El-Sisi inspected the construction works to develop a number of roads, axes and bridges in the East Cairo region, and the president was keen on being reassured from the workers in the various sites on the progress of work, as well as listening to their views, and directed to adhere to the time plan to complete the construction work and raise efficiency taking into account the application of the best safety and security standards.

President Abdel Fattah El-Sisi participated in the 4/5/2020 Summit in the Non-Aligned Movement via video conferencing technology, which was held under the title "United against the Corona Pandemic”, with the participation of a number of heads of state and government members of the movement, on top of which is The President of the Republic of Azerbaijan ,Ilham Aliyev and the current President of the Movement, as well as the President of the seventy-fourth session of the United Nations General Assembly, the Secretary-General of the United Nations, the Director-General of the World Health Organization, the Chairperson of the African Union Commission, and the Vice-President of the European Commission.

In his speech at the summit, Mr. President stressed the importance of international cooperation and solidarity in order to respond effectively and urgently to the Corona crisis, especially by working to ensure the provision of the necessary medical and preventive supplies, and intensifying scientific research efforts to develop a drug and vaccine for the Corona virus.

The summit witnessed the consensus on the importance of the NAM member states to enhance their cooperation at all levels to counter the spread of the Corona virus, especially through the exchange of experiences and cooperation between the national health authorities.

On 5/19/2020, President Abdel Fattah El-Sisi participated in the meeting of the African Contact Group on Libya at the level of Heads of State and Government with the participation President of the Republic of the Congo and Chairman of the Group,  “Dennis Sassou Nguesso”, and President of South Africa, as well as representatives of the Presidents of Algeria and Chad, as well as Chairperson of the African Union Commission, the Peace and Security Commissioner of the African Union, and a representative of the Secretary-General of the United Nations .

In his speech during the meeting, the President affirmed Egypt's steadfast stance on the Libyan crisis, which is the necessity of reaching a political solution to the crisis, preserving Libya's sovereignty, security, and territorial integrity, in addition to fully supporting the Libyan people's will and choices, and rejecting foreign interference in the Libyan internal affairs.

The President also stressed the importance of giving anti-terrorism in Libya a special priority by the African side, as it represents a threat to the stability and security of the Libyan neighbors and the African continent as a whole, pointing to Egypt's support for the efforts of the African Union in resolving the Libyan crisis.


Telephone calls of the President of the Republic

President Abdel Fattah Al-Sisi received on  12 May 2020,  a phone call from King of Bahrain , Hamad bin Eissa,  and the contact dealt with some topics of bilateral relations between Egypt and Bahrain, in addition to discussing the developments of a number of different regional files of common concern. During the contact, discussions were also reached on the efforts of the two countries to combat the spread of the new Corona virus, as it was agreed on joint coordination in this framework through exchanging the best experiences and communication between the agencies concerned with the efforts of control and health protection measures.


President El-Sisi received on May 13, 2020, a phone call from President of the Republic of South Africa,Cyril Ramafuza, and the call touched on the developments of a number of files on the agenda of the African Union. Discussions were made on efforts to combat the spread of Corona Virus in Africa, and the contact also strengthened bilateral cooperation between Egypt and South Africa in various fields, where President Sisi stressed Egypt's keenness to strengthen the existing historical and brotherly relations with South Africa at the continental and international levels.

President Sisi received 5/22/2020 a phone call from the Iraqi President, Barham Saleh, to congratulate on the occasion of Eid Al-Fitr, as he expressed his sincere wishes to the government and people of Egypt to achieve progress and prosperity ... The contact also discussed a number of files of bilateral relations as it was agreed to activate the cooperation mechanisms between the two countries and enhance the efforts of the Joint Higher Committee, especially in the economic, medical and security fields.

President Sisi received on 5/30/2020 a phone call from the French President Emmanuel Macron. The contact dealt with discussions on the developments of a number of international and regional files, foremost of which is the situation in Libya, and the President affirmed Egypt's consistent strategic stance towards the Libyan crisis represented in restoring the pillars and institutions of the national Libyan state, ending the chaos of the spread of criminal groups and terrorist militias, and the two Presidents agreed on the need to intensify coordination in this regard in the coming period.