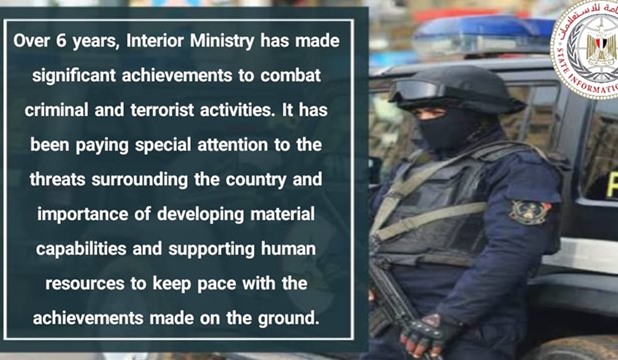 Over the past six years, the Egyptian police officers have made significant achievements to combat criminal and terrorist activities. The Interior Ministry has been paying special attention to the threats surrounding the country, as well as the importance of developing material capabilities and supporting human resources to keep pace with the achievements made on the ground.


During the past six years, the Interior Ministry has succeeded in achieving the following:

The Cabinet has made amendments to some provisions of the anti-terrorism law. Law No. 94 / 2015 was issued to define the mechanism of notifying terrorists and renting property as well as impose criminal penalties on violators.

The law states: “Without prejudice to the rights of persons of goodwill, the court rules every conviction issued for a terrorist crime as well as the punishment imposed for the crime, by confiscating realestate, money, personal property, weapons, equipment, documents, and other things that were used in the crime or as a result to".

The Interior Ministry has created especial counter-terrorism units that include elements with distinguished training capabilities, from the armed forces and police officers in Central Security, under the name of 888 Anti-Terrorism Units.

-          A comprehensive update of the infrastructure, logistic and material potential

About 300 police facilities have been established and developed. Armored police vehicles have been modernized, 14,000 new vehicles, 3,000 armored minibuses, 1,000 rescue vehicles, 2,500 patrol cars, jeeps and jeeps, 3000 pickups, 3100 trucks and minibuses, and 4000 motorcycles, 600 truck trailers added. These steps contributed to the qualitative rise in support of police units to play an effective role in the Egyptian street.


State facilities, central squares, railway stations, subways and tourist destinations have been provided with a surveillance camera system in coordination with the relevant authorities in the country. Moreover, some police cars (patrol / rescue) are equipped with LPR cameras, CCTV to identify number plates, record procedures and connect all through the computing network to police stations and centers. This system will cover the whole country.