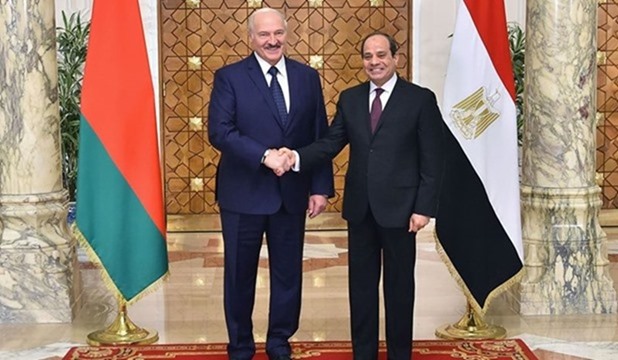 The two presidents discussed the implementation of agreements reached during Sisi’s visit to Minsk in the summer of 2019, and the prospects of developing economic and trade relations.

Their talks also took up interaction issues on international platforms and ensuring security in the region and in the world at large.

- President Abdel Fattah El Sisi and his Belarus counterpart Alexander Lukashenko started a session of talks here at Ittihadiya Palace. The talks mainly cover means of enhancing bilateral relations in all domains, particularly the economic and trade ones and the progress in implementing agreements reached during President Sisi's visit to Minsk in 2019, along with a number of other regional and international issues of mutual interest.

- President Abdel Fattah El Sisi and Belarus President Alexander Lukashenko attended the signing of four agreements and memoranda of understanding to enhance cooperation between the two countries following a session of talks held at Ittihadiya Palace.

First a memorandum of understanding was signed by Foreign Minister Sameh Shoukri and his Belarus counterpart focusing on the establishment of a high-level committee for political dialogue between Egypt and Belarus.

The two sides also inked an executive program on cooperation in university and post-graduate education.

An MoU between the central banks of Egypt and Belarus was signed by Deputy Central Bank of Egypt Governor Gamal Negm and his Belarus counterpart.

The two countries also signed a cooperation agreement on mutual support in the field of customs.

- During a press conference with his Belarus counterpart Alexander Lukashenko following an expanded round of talks at the Ittihadiya presidential palace in Heliopolis, President Sisi has stressed Egypt's keenness on promoting relations with Belarus in all fields to meet the aspirations of the peoples of the two countries.

- Parliament Speaker Ali Abdel Aal received Belarus President Alexander Lukashenko at the parliamentary premises in Cairo, where he said Egypt is bound by distinguished ties with Belarus at the political, economic and military levels.

- President Abdel Fattah El Sisi accompanied his Belarus counterpart Alexander Lukashenko on a tour of the New Administrative Capital. The tour included the Arts and Culture City, the Sports City, the Nativity of Christ Cathedral, the Government District as well as the new headquarters of the House of Representatives and the cabinet.

The two leaders inspected the venue of the exhibition held on the sidelines of the Egyptian-Belarus business council meetings with the participation of Egyptian and Belarus companies.