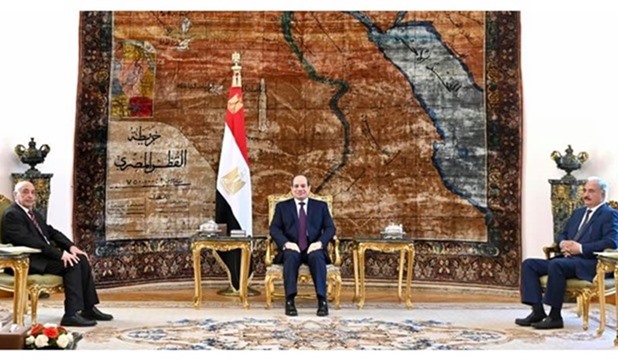 Head of the Egyptian Intelligence Service Abbas Kamel, Speaker of the House of Representatives Ali Abdel Aaal and Foreign Minister Sameh Shoukry attended the meeting.
The meeting comes out of Egypt's keenness on achieving security and political stability in Libya, added the spokesman, pointing out that Libya is part of the Egyptian national security.
Meanwhile, President Sisi, Speaker of the Libyan House of Representatives Aguila Saleh and Commander of Libyan National Army (LNA) Khalifa Haftar announced an initiative to start a ceasefire in Libya as of 6 a.m. on Monday 8/6/2020.
The initiative was based on the communiqué of the Berlin Summit that aimed at reaching an overall political solution to the Libyan crisis.
The initiative stated that the UN and the international community will force all foreign parties to get the foreign mercenaries out of Libya, dismantle militias and press them to hand over their weapons in order to let the Libyan forces protect the country.

During a talks with Haftar and Saleh, President Sisi has stressed that Egypt has a strict and firm stance on the Libyan issue, which is based on helping Libyans have sovereignty over their country, reaffirming that Egypt mainly aims to serve the interests of Libya and its people.

Egypt did not and will never make any contact, agreement or coordination with any party at the expense of the Libyan interests, Sisi added.

During a joint press conference following a tripartite meeting held with Haftar and Saleh, President Sisi said Commander of the Libyan National Khalifa Haftar and Speaker of the Libyan House of Representatives Aguila Saleh affirmed their willingness to achieve the will of the Libyan people. "They asserted that the sovereignty of Libya and its unity should be protected," Sisi said, pointing out that an agreement was reached to end the Libyan conflict.

President Sisi announced a new political initiative aimed at ending the conflict in Libya, the initiative dubbed "Cairo Declaration" stipulates that a ceasefire should start at 6 am (4 GMT) on June 8, with an adherence to all international initiatives and Security Council resolutions on the unity and territorial integrity of the Libyan land.

It also obliges all parties to remove all foreign mercenaries, dismantle militias, and hand over their weapons to allow the LNA to cooperate with other security bodies to carry out their military duty.

The initiative also stipulates the continuation of talks by the 5+5 Libyan Joint Military Commission in Geneva sponsored by the UN.