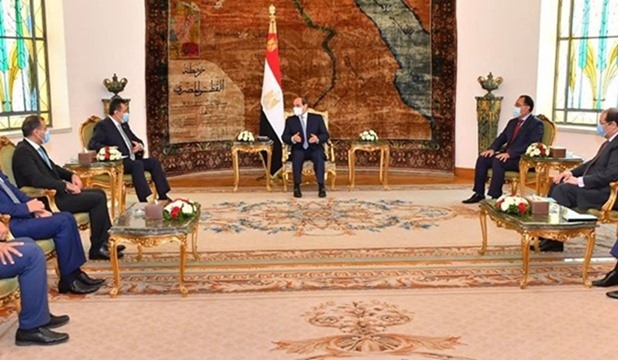 
The activities of the Visit


Abdel Malak’s three-day visit to Egypt will be a good chance to discuss means of boosting bilateral relations in all fields, Madbouli said.


Madbouli and Abdel Malak are set to co-chair an expanded meeting later today to probe cooperation between their countries.

Egyptian Prime Minister Mostafa Madbouly said on Sunday that Egypt is keen to provide all political and logistical support to Yemen and the Yemeni people.

In a press conference, Yemeni Prime Minister Maeen Abdul-Malik asserted that Egypt fully supports the Yemeni government and President Abdrabbuh Mansour Hadi. “Egypt supports Yemen, its safety and the unity of its territories because Yemen’s stability means stability for Egypt,” he said.

“Egypt is honoured to be hosting more than 1 million Yemeni citizens and the Egyptian government is keen to treat them like Egyptian citizens, affording them the same rights and services,” he said during the press conference, which was held following his talks with the Yemeni prime minister.

Madbouly also said the Egyptian government has provided support for the Yemeni citizens in terms of healthcare and education.

“The Egyptian government rejects all forms of regional intervention from non-Arab countries in Yemen, as those interventions destabilise and complicate the Yemeni scene,” he said, adding that Egypt appreciates the efforts of Saudi Arabia and the Arab coalition in supporting legitimacy, unity and stability in Yemen.

Egypt is part of the coalition launched in 2015 to fight the Iran-backed Houthi militias in Yemen.

The Egyptian prime minister revealed that he spoke with his Yemeni counterpart about bilateral economic cooperation in rebuilding Yemen, adding that Egyptian companies and technical expertise will benefit the Yemeni people in the rebuilding of their country.

Yemeni Prime Minister Abdul-Malik said that Egypt and Yemen share the same views about their national security, adding that Yemen is currently in a very difficult phase because of the foreign interventions and Iranian backed-Houthi militias.

The Egyptian government invited the Yemeni premier to visit Cairo last week for talks and consultations on boosting bilateral relations.


The president asserted Egypt's unshakable stance towards supporting Yemen's current legitimate government as well as the unity and sovereignty of Yemen and its national institutions.

He asserted the importance of continuing efforts meant to reaching a political settlement to the Yemeni crisis in line within the resolutions of the international legitimacy, Gulf initiative and the outcomes of the national dialogue.


In his letter to Sisi, Hadi expressed appreciation for Egypt's support to restore safety and stability in Yemen and the region.

Hadi voiced his country's willingness to boost cooperation with Egypt at all levels during the coming period.


The Yemeni Premier reviewed the latest developments in his country, efforts of the government to retrieve peace and stability alongside challenges facing the Yemeni people due to the deteriorated humanitarian situation.

He, also, hailed care received by the Yemeni community in Egypt and expressed eagerness to tape the Egyptian know-how in the rebuilding and development process, noting that the Egyptian experience throughout the past years is a distinguished and inspiring one for the Arab world.


The meeting tackled the current cooperation between the two countries within the framework of boosting security in the Red Sea, Radi said, adding that they exchanged views on the bilateral relations along with means of providing support to the Yemeni side to assist it in overcoming the current crisis.


Yemeni Prime Minister Maeen Abdulmalik commended the enlightening role played by Egyptian intellectuals and researchers while backing the Yemeni people in their decisive battle for regaining the state and ending the Houthi group’s coup.


Abdulmalik made the remarks on Tuesday during his meeting with a galaxy of Egyptian intellectuals and researchers, as they exchanged viewpoints on the latest updates in the Yemeni arena, as well as the regional and international developments.


The meeting took up efforts exerted to resolve differences between the legitimate Yemeni government and the Southern Transitional Council, through Riyadh Agreement.

The two sides also underlined the importance of uniting Arab efforts to stand against Iranian interference in the region.


The Yemeni premier posted Egyptian intellectuals and researchers on steps taken by the legitimate government led by President Abd-Rabbu Mansour Hadi and the Saudi-led coalition to achieve stability and peace in Yemen.


He also pointed to the great risk posed by the Houthi movement which is exploited by Iran to blackmail the international community, asserting that all attempts to reach a political settlement to the Yemeni crisis were rejected by the intransigent Houthis.


The two parts agreed to continue coordination between the two countries' foreign ministries to set a date for the joint committee meeting.