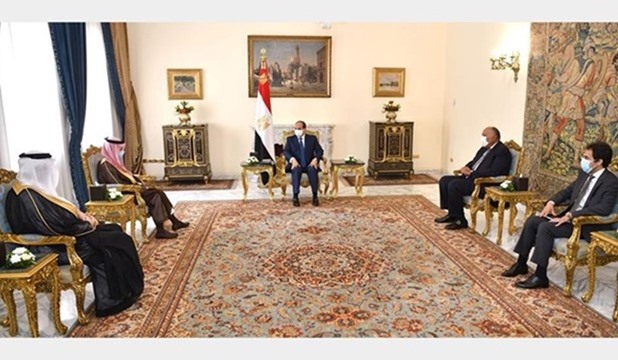 The two ministers will discuss ways of boosting cooperation between the two countries in light of current threats in the region emerging from foreign interference in some Arab countries' internal affairs.


Egypt is interested in developing cooperation and coordination with Saudi Arabia, Sisi affirmed.


The president reviewed Egypt's vision towards the Libyan crisis and its keenness to deter the foreign interference and fight the extremist and terrorist groups in order to restore Libya's stability and security.


Meanwhile, the top Saudi diplomat conveyed the greetings of the Saudi king and crown prince to President Sisi.

He also expressed his appreciation for Egypt's strategic and vital role, under President Sisi, in protecting the Arab national security, valuing its endeavors to establish stability, security, and development at the regional and international levels.

The meeting also discussed regional issues of common interest, including the Syrian, Iraqi, and Yemeni issues, with the two sides asserting the political solutions are the best ways to resolve these issues.


The Saudi foreign minister affirmed that his country supports Egypt's efforts to settle various disputes in the region, noting that Cairo will always be a main partner for Riyadh.

The two sides tackled distinguished relations binding the two countries in addition to the latest developments in the region.

Foreign Minister Sameh Shoukry and his Saudi counterpart Prince Faisal bin Farhan asserted the depth of bilateral relations at a joint news conference they held at the conclusion of their official session of talks.

Shoukry welcomed the Saudi minister's first visit to Egypt since assuming office, saying it reflects the distinguished relationship between Egypt and Saudi Arabia in all domains and praising the high level of their cooperation and coordination in face of mutual challenges.

He said that President Abdel Fattah El Sisi met Prince Faisal earlier in the day and the two sides reiterated commitment to intensifying joint efforts to address all issues of mutual concern, especially those connected with the Arab world and serving regional peace and stability.

Outcomes of the visit

The two ministers asserted that there is full accord between the Egyptian and Saudi visions as regards conditions in the region and means of handling them.

In the same regard, they added that Cairo and Riyadh are having constant coordination with the aim of achieving regional security and stability.