Journey of the most famous Egyptian Senate’s speakers 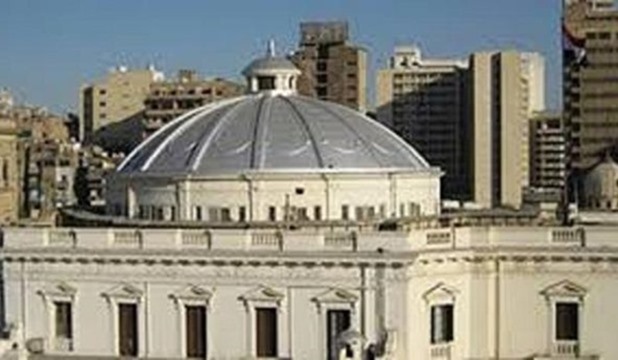 The Egyptian Senate journey began in the year 1824 AD, when Muhammad Ali established the High Council, then the Consultation Council, its journey developed during the reign of Khedive Ismail through the representatives’ Shura House, then the Laws Shura Council during the era of Khedive Tawfiq.
The second stage was with the most famous constitution in the Egypt parliamentary life, the constitution of 1923, which stipulated the formation of the Senate, and adopted the principle of equal competence between the two chambers of Parliament.

As for the third stage, it was with Egypt's permanent constitution, the 1971 constitution, which came to establish the Senate in 1980 AD, and continued until the January 25, 2011 Revolution.
Currently, President Abdel Fattah El-Sisi issued, on July2, 2020, a new Senate Regulation Law No. 141 of 2020, which came in implementation of the newly introduced constitutional amendments to the provisions of the 2014 constitution in 2019.

In light of the previous brief , we review in the following lines a reading of the biography and journey of the most famous figures who assumed the Position of speaker of the Senate, and who achieved the first titles in their lives as the first speaker of Egypt’s Parliament, and the first to hold the title of Sultan in Egypt .


Ibrahim Pasha ... the second ruler of Egypt from the Alevi family

"Salaam Ali Ibrahim led his army from victory to victory." .. This phrase, which corresponds to reality and history, is found engraved at the bottom base of Ibrahim Pasha’s statue in the Ataba Square in Cairo Down town, accompanied by a list of the battles he fought with their dates.
The oldest son of Muhammad Ali, historians considered that he has helped his father in his conquests and projects he came to Egypt on 28th August, 1805 AD, he was then 16 years old, he studied military systems on the hands of the Frenchman Suleiman Pasha.

He assumed multiple positions started on January 28, 1805 AD, where he was appointed governor of the castle upon his arrival in Egypt with his family, and the second stage was on December 13, 1807 AD, when he returned to Egypt from Istanbul, and assumed the position of Minister of Finance, and in April of the next year he took the rule of Upper Egypt, combining this position with the position of the Ministry.

In 1813 AD, he held the position of the chief of the region of the Egyptian country, and at the direction of his father he enumerated agricultural lands, prepared service books that are considered one of the most important urbanization works of Muhammad Ali Pasha, then Muhammad Ali made him the commander of the Egyptian army in the Wahhabi war (1816-1819), and he was very successful.

He headed the Consultative Council in 1829 AD, which one of its specializations was to research civil and military administration issues.

The Consultation Council was held for the first time in the Ibrahim Pasha Palace, the High Palace in Garden City under his presidency.

The Council had 156 members, including 33 senior officials and scholars, 24 provincial commissioners, and 99 senior dignitaries from Egypt.

The Ottoman Sultan granted him the mandate of Jeddah and its annexes, and the chiefdom of the Grand Mosque and Medina.

He also assumed the leadership of the Egyptian forces in the Greek war and the Levant war, and won many battles, he also managed to enter Damascus and defeated the Ottomans in the Battle of Konya, then on September 2, 1848 AD. he assumed the rule of Egypt  due to Muhammad Ali's illness.

He did reforms to the Trade Court system, and he preferred free trade over monopoly.

During his reign, the number of forts increased to twenty-five, and he was concerned with completing the fortifications of Alexandria and providing them with soldiers and weapons.
He also ordered the paving of a military road from Alexandria to Abu Qir and Rashid to transfer soldiers and weapons to forts, he drew up a plan to establish governmental schools in the main cities; according to the system followed in Egypt, and he died on November 10, 1848.

He was born on August 18, 1819. He was brought to Egypt as a mamluk (slave soldier) by Ibrahim Pasha in 1830. His brilliance and cleverness in education made him distinguished among the Mamluks, and his fame spread among the leaders. He was promoted to the rank of First Lieutenant by Muhammad Ali Pasha. Later, he became the Accounting and Revenue Registry two years after completing his postgraduate studies in 1836.Then his journey in assuming the ministerial positions started.


His journey did not stop at the ministerial level, but extended to reach the Presidency of the House of Representatives on November 25, 1866 until January 24, 1867. Under his presidency, he assigned Sharif Pasha with the mission of translating foreign constitutions and regulations of European councils in order to benefit from them in the revision of the regulations of the Egyptian Parliament. This translation was carried out by the Syrian writer and journalist Adib Ishaq.


Then he assumed, for the second time, the Ministry of Interior in 1867, then he was appointed President of the Private Council  in 1868, then Minister of Agriculture and Trade in 1875.


He did not stay long as Speaker of the House of Representatives.  He, soon, left position on January 24, 1867 to become Prime Minister of Egypt in 1882, and he was assigned to form his short-lived government that lasted from June, 1882 to August , 1882, only.

Hussein Kamel.. the first to hold the title of Sultan of Egypt

He was born on November 21, 1853 A.D., in Cairo Governorate. He received his education at Al-Manial School. Then he travelled to France in 1868, and returned concomitantly with the opening of the Suez Canal, where he was the interpreter of Empress Eugenie.


He assumed the position of Inspector General of the regions of Lower and Upper Egypt in 1872 AD, then Head of Public Works, then Head of Finance, then President of the General Assembly, and then Speaker of Shura Council (the Senate). Finally, he took over the rule of Egypt after the declaration of British protectorate over Egypt on December 19, 1914 AD.


• He saved the country from the repercussions of the River Nile flood by taking all necessary precautions to secure and strengthen bridges.

• He was the first to establish agricultural exhibitions in Egypt.

• He established the railways that connected Helwan to the capital.

• He decided to give excellence rewards to brilliant students, which increased scientific competitiveness among students and boosted the level of the  educational process.

• He laid the foundations of the elementary military schools for boys in Cairo and Alexandria.

• He was the first Egyptian ruler that coinage  used his name on coins and bills, after the end of the Ottoman sovereignty.

The rule of Sultan "Hussein Kamel"  lasted, only, for two years and nine months as he died due to a disease in October 1917.


Adly Yakn Pasha… The first to set up public schools

"Adly Yakn" was born in Egypt on January 24, 1864. He was of a Turkish-Albanian origin. He assumed the post of  Egypt's Prime Minister three times between 1921 and 1930. Before that, he was the minister of Ma'aref (knowledge). He founded the Constitutional Liberal Party in October 1922.


One of the most important contributions during his tenure as Minister of Ma'aref was Imposing Arabic as the official language in primary and secondary education. Besides, he took the first steps to establish a public university, established the first kindergarten schools in 1918, established primary public schools, and a school for French and science teachers in 1918, which was called 'Tawfiqeya'.


Adly Yakn formed his first government on March 16, 1921. When he served as a Prime Minister in 1921, he participated in the negotiations with Lord Curzon, the British Foreign Secretary, for Egypt's independence. The negotiations failed; so, he resigned. He was one of the founders of the Constitutional Liberal Party, and became the party chairperson (October 29, 1922- January 17, 1924).


He formed his second government (June 7, 1926- April 1921, 1927), in which he assumed the office of the minister of interior. It was the first coalition government formed by Al-Wafd and the Constitutional Liberals parties. However, he resigned when the House of Representatives refused a proposal to thank the government for its policy for supporting Banque Misr (Bank of Egypt) and when they had disagreements over some budget items.


After returning to Egypt, he worked as a lawyer in the city of Mansoura for a short period. In 1917, he was chosen to teach at the university. Throughout his career, he did not stop practicing journalism and writing political articles and literary chapters in Al-Ahram newspaper and Al-Jarida newspaper (party newspaper). In 1922, he resigned from the university and devoted his time  to political work. He was elected as editor-in-chief of Al Siyasa newspaper, the organ of "The Liberal Constitutionalist party" for which he was also an adviser.

He assumed the position of deputy president of the 'liberal constitutionalist' party in 1941 and became its president, 1943 till 1952 in which the new Egyptian revolution prohibited party formation. In addition, he became president of the senate council during the period 1945 till 1950.  He also headed the Egyptian delegation in formation of the convention of the Arab league as well as its delegation to the UN several times.


Heikal’s writings were affected by his legal law and press style. He expressed his opinion objectively and logically with no rhetoric or fanaticism. He called for inspiring the Pharaonic civilization in order to maintain cultural continuity.


Heikal wrote two novels. His novel "Zeinab", written in 1914, was the first Arabic novel, in the proper artistic sense of the word. The two novels reflected Heikal’s high creativity.