Tripartite talks on GERD adjourned for one week 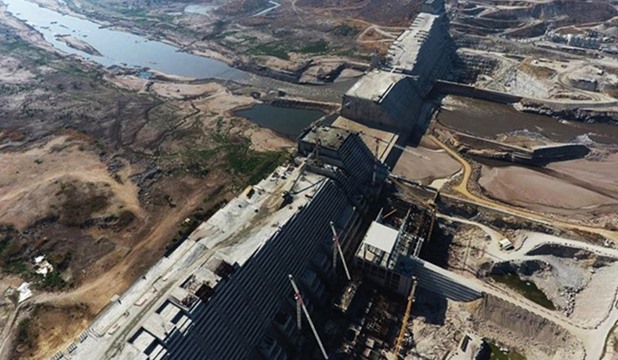 Egypt participated on Monday August 10,2020 in a tripartite meeting for negotiations on the rules regulating the filling and operation of the controversial Grand Ethiopian Renaissance Dam (GERD), according to a statement from the Egyptian Ministry of Water Resources and Irrigation.

The statement noted that talks among Egypt, Sudan, and Ethiopia over the dam have been postponed for one week upon Khartoum's request; with a view to continuing internal consultations in light of the recent developments in negotiations.

The Egyptian side expressed readiness to resume negotiations on the basis of the outcomes of the mini-African summit held on July 21, in addition to the results of the ministerial meeting held on August 3, which called for sealing a binding deal on the rules of filling and operating the Renaissance Dam, the Ministry of Water Resources and Irrigation said in a statement.

Spokesperson of the Ethiopian Ministry of Foreign Affairs Dina Mufti announced the resumption of GERD talks with Egypt and Sudan Monday according to the official news agency, ENA.

This announcement however, comes amid Egyptian and Sudanese objection to the unilateral acts of Ethiopia on filling the reservoir of GERD without reaching an agreement with the downstream countries.

Mufti added that his country will not “surrender its national interest to any parties affected by the United States pressure” according to ENA, he noted that “Ethiopia will not be affected by cutting its relations with the U.S., but rather the U.S. that will be affected by it.”

Six officials and congressional aides told Foreign Policy, July 22, that The US administration is considering suspending some aid to Ethiopia, as Ethiopia’s prime minister announced the completion of the first filling of the Renaissance Dam, which heightened tensions with Egypt over fears of water shortage.

Earlier this year, The United States has announced it will continue to work with Egypt, Ethiopia and Sudan until they sign an accord on the hydropower dam, according to US Treasury Secretary Steven Mnuchin.

The three countries had expected at the time to sign an agreement in Washington on the filling and operation of the $4 billion dam, but Ethiopia skipped the meeting and only Egypt has initialed the deal.

Mnuchin praised Egypt’s decision to initial the brokered document, which includes rules for filling and operating the controversial dam in Ethiopia. He also warned Ethiopia from filling the dam before an agreement is reached.

The sponsorship of negotiations by the US and the World Bank started in November last year after rounds of failed negotiations between Egypt and Ethiopia.

This move comes as a result of Ethiopia's change of the negotiation agenda and adding new conditions.

In the meantime, head of the Sudanese technical delegation in the negotiations of GERD Saleh Hamad, expected that the African Union would put matters into the right perspective” with regard to filing and operating the Dam.

Hamad added in statements to Sky News, that Sudan has many options on dealing with the Renaissance Dam, adding: "We will take the necessary steps to protect our water rights."

Earlier, Abbas sent a letter to the Minister of Foreign Relations and International Cooperation in South Africa regarding the developments in the Ethiopian stance on the negotiation process.

Abbas considered that the letter he received from his Ethiopian counterpart on August 4, raises serious concerns regarding the current negotiations process.

In a letter sent to South Africa, which currently presides the African Union (AU), Egypt retaliated its total rejection to the Ethiopia unilateral acts concerning the filling and the operating the controversial Grand Ethiopian Renaissance Dam, announced the Egyptian Ministry of Water Resources and Irrigation in a statement on Wednesday evening.

The letter included Egypt’s rejection to the unilateral act committed by Ethiopia when it conducted the first of phase of the filling the dams reservoir with Nile Water on July 22, 2020, without going back to the downstream countries [Egypt and Sudan], whose shares of Nile water could be affected by the operation and the filling of the dam.