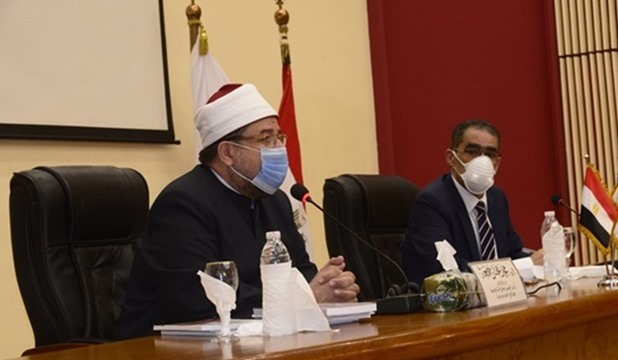 Awqaf Minister Prof. Dr. Muhammad Mukhtar Juma stressed that the State provides full protection for all places of worship and for all citizens, regardless of their beliefs and guarantees their freedom to practice their religious rituals. In this regard, he pointed out that the state carried out restoration works to the synagogue in Alexandria, despite the lack of visitors, out of its respect for all heavenly religions .

This came in the monthly meeting, held by the State Information Service (SIS) with the accredited foreign media correspondents in Egypt. The meeting was attended and managed by SIS Chairman, Journalist Dia' Rashwan, who confirmed at the beginning of the meeting that these meetings are held in accordance with the directives of President Abd El- Fattah El-Sisi. The meetings are held to maintain communications between all state agencies and foreign correspondents in Egypt to provide them with all positions in all areas related to Egypt's foreign and domestic policy to enable them to convey a realistic image to international public opinion .

The Minister of Awqaf pointed out that all the heavenly religions call for the same human principles such as protecting the human beings, prohibiting killing, lying and assaulting people's money and reputation, as well as calling for peace and understanding between individuals and peoples. Any deviation from these principles by followers of any religion does not offend the religion or belief itself, but it means that those who practice such deviation and attack the lives of others or try to undermine their rights and freedom of belief are opposing their religion and are not following their principles.

Addressing foreign correspondents, Dr. Mokhtar Juma added that respecting the right to practice religious rituals is a right that stems from respecting religions, because freedom of belief is one of the constants that maintain the stability of societies and the whole world. There is no compulsion in religion. The attempt to impose any belief on others will lead to endless conflicts and religious wars. Concerning this point, Mr. Dia' Rashwan stressed that respecting freedom of belief in Egypt is - in addition to its religious dimensions - an original human right that is stipulated and made absolute in the Egyptian constitution. Moreover, the state and all its institutions paid due attention to respecting it so that the phenomena that were called 'sectarian strife' nearly disappeared.

In response to questions of foreign correspondents, the Minister of Awqaf confirmed that there has been a radical change in the recent years in the religious discourse in mosques and that the control of some extremist leaders over certain mosques came to an end. In addition to that, the mosques became completely away from politics. Throughout all the elections that have taken place in Egypt in recent years, there is not a single case of the exploitation of mosque platforms to support a party, faction, or entity.

The minister stressed that the state will not tolerate terrorists or advocates of extremism, sabotage, destruction, abuse of the prestige and stability of the state, and harming brothers in the homeland or their churches. He pointed out that the one who martyrs in the defense of churches is the same as those who martyr in the defense of mosques.

The Minister of Awqaf, during the meeting which was attended by a large number of foreign correspondents representing nearly fifty foreign media organizations, praised  the positions of the Egyptian Church, which contributed to the eradication of strives and which foiled the attempt to sow discord among the Egyptian people. Besides, he pointed out that Egypt is now witnessing an unprecedented period of national unity, tolerance, cohesion among all categories of the Egyptian people, and harmony between Muslims and Christians.

Concerning the ministry's efforts in the development of the religious discourse, Awqaf Minister pointed out that 80 books and 90 translated books, in 18 languages, have been made available on the website of the Ministry of Awqaf. Moreover, there is ongoing training of imams, particularly at a specialized center for this purpose in 6th of October City.

At the end of the meeting, the Minister of Awqaf referred to the cooperation with SIS in translating and publishing books that spread the tolerant religious discourse through SIS means at home and abroad.