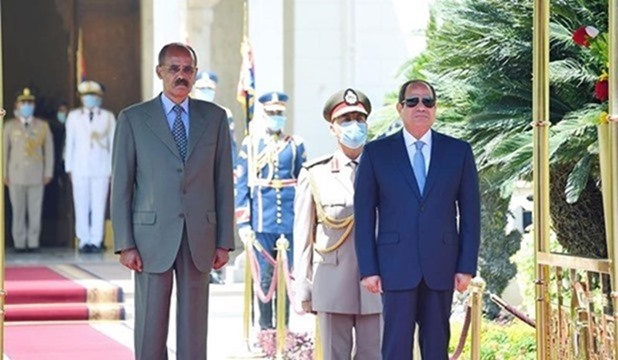 President Abdel Fattah El-Sisi met on July 4, 2020, with Prime Minister Dr. Mostafa Madbouly, Minister of Planning and Economic Development, Dr. Hala Al-Saeed, and a number of senior officials, and the meeting dealt with a review of the developments of the project to establish a strategic warehouse system for medical storage at the state level. The context is to accelerate the process of establishing strategic stores for medical storage in order to ensure the availability of a strategic reserve to cover the needs of current and future consumption of medical supplies and medicine.

President El-Sisi directed during his meeting on July 5, 2020 with the Prime Minister and Minister of International Cooperation, Dr. Rania Al-Mashat,to strengthen cooperation relations with international and regional economic cooperation and finance institutions, in parallel with commitment to external borrowing controls, and the importance of following up the implementation rates of targeted projects in a manner that achieves optimal use of Financing packages and maximizing benefit of comprehensive development in various sectors. The meeting dealt with reviewing "the strategy of the Ministry of International Cooperation in cooperation with partners and various international financing institutions, within the framework of the country's economic and development efforts."

During his meeting on July 5, 2020, , with Prime Minister Dr. Mostafa Madbouly, and, Minister of Communications and Information Technology Dr. Amr Talaat, President El-Sisi was briefed on the plans and efforts of the Armed Forces Signal Corps to secure the western depth of Egypt, the common borders with Libya, the northeastern and southern directions, and all strategic directions, an extension of the international borders For Egypt, as well as the conditions of the border crossings and their complete security. President Al-Sisi followed up the executive position on the project to establish a unified national government network for emergency services and public safety.

President El-Sisi met Saturday, July 11, 2020, with Prime Minister Dr. Mostafa Madbouly, Minister of Petroleum and Mineral Resources, Engineer Tariq Al-Mulla. The meeting dealt with the plans and efforts of the Ministry of Petroleum in developing various sectors, especially mineral wealth, petrochemicals, production and distribution of gas, and the President directed in this regard to formulate a comprehensive strategic vision for the development of the mining sector in Egypt, in order to contribute to exploring the most important areas of potential mineral resources at the level of the Republic.

President Abdel Fattah El-Sisi met Monday, July 13, 2020 with the Prime Minister, Minister of Health and Population Dr. Hala Zayed,, and a number of senior officials, and the meeting dealt with a review of the general framework of the national project for self-sufficiency from plasma derivatives, where the steps taken in this context were presented. The President directed that all scientific and technical aspects of the project be completed in order to perform it in an optimal manner.

On Saturday, July 18, 2020, President El-Sisi met with the Minister of Interior, Major General Mahmoud Tawfiq. This came according to what was announced by the official spokesman for the Presidency of the Republic on his official page on Facebook.

President El-Sisi,on  July 19, 2020, during his meeting with the National Defense Council, discussed the overall political, security and military situation on all strategic directions of the state, within the framework of the various current challenges on the regional and international arenas.

President El-Sisi directed on July 22, 2020, during his meeting with the Minister of Transport, Kamel el Wazeer, that modern transport projects and the new system of axes and bridges at the level of the republic be integrated not only for  connectivity and mobility but also as arteries of development and life for all citizens at the level of the entire country, and the meeting dealt with reviewing the executive situation of the national project for roads, axes and means of transport at the Republic's level.

President El-Sisi met on July 25 with the Prime Minister, the ministers of finance and the public business sector, and a number of senior officials, and the meeting dealt with presenting the preliminary indicators and estimates of the financial performance for the fiscal year ending 2019/2020. The President directed to continue working on the continuous improvement of economic and financial indicators, especially employment rates, providing job opportunities, and reducing the budget deficit and public debt..

President El-Sisi met on July 25, 2020 with the Prime Minister, and the ministers of the public business sector, trade and industry, and the meeting dealt with reviewing the strategy of the automobile industry and electric transportation in Egypt, as well as presenting the position of the Egyptian cotton system. The President directed to focus on the future prospects for the electric vehicle industry, in cooperation with international companies specialized in this field. The President also directed the continuation of the country's ambitious plan to promote the spinning and weaving industry and restore Egyptian cotton to its previous state.

During his meeting on July 26, 2020 with the Prime Minister, the Ministers of Electricity and Renewable Energy, Communications and Information Technology, President El-Sisi directed the continuation of efforts to govern the electricity services management system across the country within the framework of extending mechanization and the use of smart and prepaid meters to improve service and the effectiveness of the collection mechanism. The meeting dealt with following up the executive position of a number of national projects being implemented in the electricity and renewable energy sector, and regional electrical interconnection projects.


Inauguration of the President of the Republic for national projects

President El-Sisi,on July 28, 2020, witnessed the inauguration of the industrial city in the “Rubiki” area of Badr City. The first phase of the project includes the textile factory, which includes (the thick spinning factory, the textile factory, and the dyeing and printing factory), where the best Swiss, Italian and German machines were taken into account,and choosing the appropriate labor to bring Egypt to the ranks of the major countries in the field of manufacturing and exporting to global markets.


Presidential receptions for kings and heads of state


Receiving the Head of State of Eritrea

President Abdel Fattah El-Sisi received President of the State of Eritrea, Isaias Afwerki  on 6/7/2020. During the meeting, President El-Sisi stressed Egypt's keenness to strengthen relations and consolidate strategic cooperation with Eritrea in various fields to establish a sustainable partnership between the two countries. For his part, President Afwerki expressed his country's mutual aspiration to develop bilateral relations with Egypt at various levels, especially at the present time when the Horn of Africa and the Red Sea region is witnessing successive challenges and increasing foreign interference. The meeting also touched upon the latest regional developments of mutual interest. , Especially with regard to the files of the Horn of Africa and the security of the Red Sea, as well as the issue of the Nahda Dam.


The President of the Republic receives foreign officials


President El-Sisi receives sheikhs and elders of the Libyan tribes

President Abdel Fattah Al-Sisi met on 7/16/2020 with the sheikhs and elders of the Libyan tribes representing the factions of the Libyan people. During the meeting, President El-Sisi delivered a speech in which he said that the red lines that we announced in Sidi Barani are basically a call for peace and an end to the conflict in Libya, but Egypt will not stand idly by in the face of any moves that pose a strong and direct threat to national security, not only the Egyptian and Libyan levels, but also the Arab, regional and international levels.

During the meeting, sheikhs and elders of the Libyan tribes expressed their full authorization to President El-Sisi and the Egyptian Armed Forces to intervene to protect Libyan sovereignty and take all measures to secure the national security interests of Libya and Egypt and face common challenges.

President Abdel Fattah El-Sisi received on July 20, 2020 Prime Minister of the Republic of Yemen, Dr. Maeen Abdel-Malik, and President El-Sisi affirmed the Egyptian firm stance regarding support for the current legitimate Yemeni government, as well as the unity and sovereignty of the sisterly Yemeni state, and the Prime Minister delivered a letter to the President from the  Yemeni President Abd Rabbu Mansour Hadi, which included expressing appreciation for Egypt's stances in support of the security and stability of Yemen and the regional surrounding as a whole.

The meeting witnessed a discussion of ways of joint cooperation between the two countries in the framework of enhancing security in the Red Sea, as well as an exchange of views on a number of issues related to bilateral relations and ways to provide support to the Yemeni side in order to enable it to overcome the current crisis.


Telephone calls of the President of the Republic

President Abdel Fattah El-Sisi held a phone call with Palestinian President Mahmoud Abbas on 7/19/2020, and the call dealt with discussing the latest developments on the Palestinian arena, as President El-Sisi stressed the firm foundations of the Egyptian stance on the Palestinian issue, and the two presidents agreed during the call to continue intensive consultations and coordination Between them during the coming period regarding various issues of common interest.

President Abdel Fattah El-Sisi received a phone call from, President of the Republic of Ukraine, Vladimir Zelensky on July 24, 2020, which dealt with some issues of bilateral relation lately especially in economic, commercial and tourism sectors.

Cables of the President of the Republic

President Abdel Fattah El-Sisi sent a congratulatory message to King Mohammed VI of Morocco on the occasion of the National Day celebration.