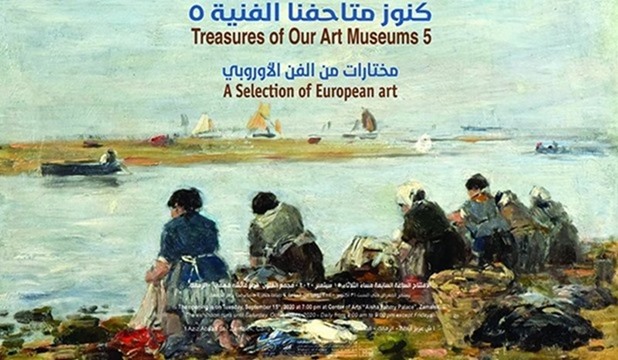 Minister of Culture Inas Abdel Dayem inaugurated exhibition titled “Selections of European Art”. The show is the fifth exhibition in the Culture Ministry’s “Treasures of Our Museums” series. More than 100 prominent works by some of the most celebrated European artists in history just landed at Zamalek’s Center of Arts AKA Aisha Fahmy Palace..

Abdel Dayem was joined at the event by Ramon Casares, the Spanish ambassador to Egypt, Candio Carbis Estrada, the Spanish Cultural Consul in Cairo, Dr. Khaled Sorour, President of the Culture Ministry’s Fine Arts sector and artist Ihab Al-Labban, director of the Center of Arts along with a number of prominent artists, art enthusiasts and critics.

Abdel Dayem stated through an official statement released via the Culture Ministry’s official Facebook page that she is very happy that art exhibitions have resumed in Egypt following the months of closures due to the spread of COVID-19, adding that such events are an important means of developing the senses and uplifting the conscience. She asserted that the “Treasures of Our Museums” series provides an opportunity for Egyptians to re-discover prominent artworks that narrate the art history of human civilization as a whole.


She invited people to head down to the exhibition to witness the beauty for themselves and with works by monumental names such as Paul Gaugin, Rodin, Claude Monet, Edouard Manet, Renoir, Alfred Sisley and Degas it shouldn’t take that much convincing, after all, how many times in one’s life do they get the privilege of looking at the breathtaking works of these art giants?!

While art is much different in the modern day to what these greats were doing back in their day (as most of them were around in the 18th and 19th centuries), Abdel Dayem stresses that this exhibition is a real opportunity to get (re)acquainted with some of the works that shaped European civilization during the lives of the artists who worked on them.

The exhibition will be on display at the Center of Arts until October 31, and includes over 100 works of arts, carefully curated from the private collections of the Guezira Museum, Mahmoud Khalil Museum, the Museum of Fine Arts in Alexandria. The works are done in a wide variety of media to cater to all the various artistic tastes out there, from oil painting to sculpture.