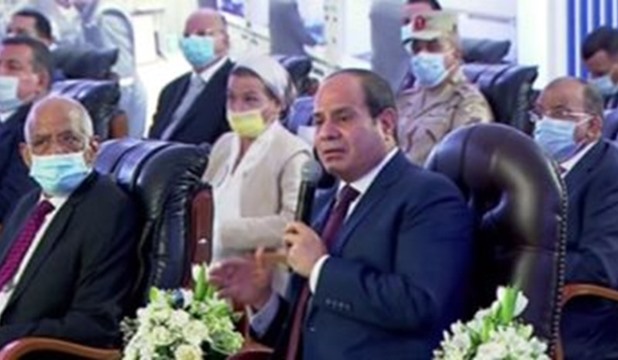 President Abdel Fattah El Sisi on Sunday 27/9/2020 witnessed the inauguration of the Hydrocracking Complex in Qalubiya's district of Mostorod.

Verses of the Holy Quran were recited at the start of the ceremony.

Following President Sisi's inauguration of El Tagned-Shubra Banha axis project via video conference, a documentary film about the Egyptian Refining Company (ERC) was screened to highlight the importance of oil production and refining projects that Egypt has initiated a long time ago.

The film is produced by the Armed Forces Morale Affairs Department.

Following the screening of the documentary, ERC Chairman Ahmed Heikal extended thanks and appreciation for President Sisi on his support to the oil refining sector and his visit to workers at ERC project sites.

He also praised the economic reform measures introduced by the government to gain the confidence of investors and shareholders in a way that enabled the company to finance the hydrocracking project to be a pillar of the industry in Mostorod district.

Heikal also said the main purpose of the hydrocracking complex project of the ERC is the cracking of mazut (heavy residual fuel oil) to produce higher value products such as diesel, benzene, butane and others.

The project will greatly contribute to decreasing imports of oil products and save from $600 million to $1 billion for the state’s coffers annually.

Following the word of ERC's chairman, a documentary film was displayed to highlight the comprehensive concept of human rights as well as the right to descent life, housing, health care and education among others, which are vital issues the Egyptian State has recently placed on top of its priorities.
The film highlighted the cherished principles of human rights integrated into all aspects of the Egyptian culture, society and education, underlining that such rights should be guaranteed to all citizens equally.
The film asserted that human rights principles are not just items written on papers, but they should be implemented and seen on the ground.
The film depicted the urban and impoverished areas before the start of mega housing projects to rebuild them in 2014 and how such despicable areas have turned into humane housing areas in which all basic services are provided.
Commenting on the film, President Sisi asserted that all attempts to mislead people and tarnish their awareness are aimed at casting doubts and spreading disappointment about the state's efforts for development and construction.
Sisi stressed that the media should play a role and be an enlightenment tool that helps in raising awareness among people.
He said the main objective behind such attempts is to destroy countries and spread lies among the people.

During his tour at the complex, President Sisi listened to an explanation about the project and its stages, beginning from receiving the heavy oil till producing high-quality petroleum products.
The president posed for a photo op with the project's officials and engineers.